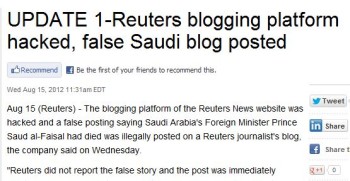 According to Agence France Presse, Reuters issued a statement noting it unpublished the article in question and that its site was hacked.  The statement, as published in Reuters’ report on the hack, reads:

“Reuters did not report the false story and the post was immediately deleted. We are working to address the problem.”

The specifics of what Reuters was doing to “address the problem” weren’t reported.

The Associated Press added that Reuters said it didn’t know “who was behind the attack.”   According to The Guardian,  “Reuters uses the WordPress blogging platform, used by several news organisations and blogs.”

We wrote earlier this month when Reuters was hacked and fake stories about Syria were posted.  At least two stories were posted, including a fake “interview with Riad al-Assad, the head of the Free Syrian Army.” Reuters noted that “two days” after that hack, one of Reuters’ Twitter accounts, @ReutersTech was hacked and “false tweets apparently designed to undermine the Syrian rebels” were posted.

We have written to Reuters asking for more information like how many stories were posted this time, what Reuters is doing to prevent future hacks and how Reuters learned about being hacked, and will update with any response.

“Reuters.com was a target of a hack on Tuesday. Our blogging platform was compromised and a fabricated blog post saying Saudi Arabia’s Foreign Minister Prince Saud al-Faisal had died was illegally posted on a Reuters journalist’s blog on Reuters.com. Reuters did not report the false story and the post was immediately deleted. We are working to address the problem.”