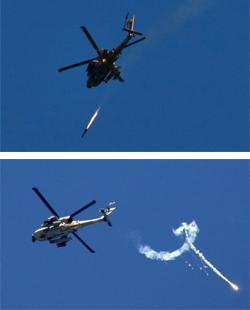 The bottom Reuters photograph is mis-captioned, according to blogger Bob Owens. The bottom photo shows a defensive flare being launched; whereas the top image shows an offensive missile being fired. Matt from VA, a commenter on Owens blog cites AP, another media outlet, as able to get the difference between flares and missiles right. Then why can't Reuters also get it right? According to Owens, such errors illustrate Reuters bias.

The problem with media errors is that there can be the perception, if not the reality, of a bias that created the mistake. This is especially true in sensitive areas such as the Middle East conflicts. Reuters should know from a previous scandal that extra care needs to be taken for fact checking–even in captions.

And yet, Bob Owens of Pajama Media points out recent questionable captions have occurred  in four Reuters photographs. He wrote that Reuters “is once again blatantly mislabeling defensive measures from Israeli aircraft as offensive weapons.”

He reminds readers this has happened before: Reuters cut ties with freelance photographer Adnan Hajj after he “was exposed for Photoshopping images during the 2006 Israeli conflict with Hezbollah in southern Lebanon.” Hajj and a photo editor were fired after “more than 900 of Hajj’s photos were withdrawn by Reuters.”

Owens explains that this time, “At least four Reuters photos…purported to show Israeli aircraft deploying weapons against Hamas targets, when the photos clearly show that the helicopters and fighter aircraft were actually dropping flares to thwart possible surface-to-air missile attacks.” And he thinks the deceptive labeling “proves that the news organization employs editors that are either as politically biased or as technically incompetent as those they fired [in 2006].”

The Reuters caption for the bottom photo shown above read, “An Israeli Apache gunship flies over the northern Gaza Strip after firing a weapons system January 4, 2009. Israeli soldiers and Palestinian militants battled in Gaza on Sunday after Israeli troops and tanks invaded the coastal enclave in the most serious fighting in the conflict in decades.” According to Owens, the photo really depicted an AH-64 Apache helicopter and a single flare (NOT a weapons system). Matt from VA, a commenter on Owens blog, gives an example where another news outlet, AP, had no trouble getting it right. The Associated Press properly distinguished and labeled the difference between flare and weaponry fire. So why didn’t Reuters get it right?

In the blog’s comments section, user Owen (not Owens) shows Reuters’ potential defense: “Notice that the captions for these photos say ‘after firing a weapons system’. They’re trying to create plausible deniability for when someone calls them on it. In principle, these helicopters could have fired a weapons system, then fired flares,  and then been photographed, and the captions would be correct. We have no evidence that this is what happened, but we cannot prove beyond any doubt that it didn’t, and that, sadly, may be enough for Reuters and its apologists to cling to it. Now, it’s quite clear that the intention of the captions is to make it seem like the flares are the weapons, but they can pretend otherwise. “

“There is simply no excuse for a Reuters photo editor to again allow such deception.” Owens says. Owen added that Reuters “have indeed learned a lesson from the Lebanon case: when spreading propaganda, cover your rear end.”