Righthaven Loses its Website? Company that Sues for Copyright Owes $ in Legal Fees 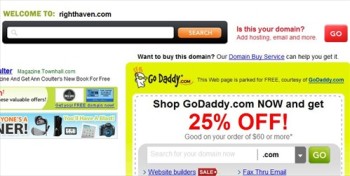 Righthaven.com lost its website address, Vegas Inc reported.  According to Vegas Inc’s report, the copyright enforcement company, which has faced a series of bad news and unfavorable rulings, had its domain name given to the Randazza Legal Group.  Vegas Inc explained that legal group “represents Righthaven creditor Wayne Hoehn” but the legal group says “a court-appointed receiver” in Nevada has the domain name so she can auction it for money.

Vegas Inc explained that Righthaven owes Hoehn almost $64,000 in court fees, which is why Righthaven’s “copyrights and website name” will be sold.

According to a Dec. 20 Vegas Inc article, Righthaven tried to appeal the mid-December Nevada ruling that Righthaven must “turns its intellectual property — including copyrights — over to a receiver so they could be auctioned” in order to pay Hoehn.

As MediaBistro explained, Righthaven had sued Hoehn for re-publishing a Las Vegas Review-Journal story on a forum. The court decided that “that Righthaven didn’t technically own the copyright to the article (just the right to sue)” so Righthaven was to pay Hoehn for his fees.

In the appeal, a Righthaven attorney, Shawn Mangano, claimed Hoehn wasn’t trying to get the money but instead “eviscerate Righthaven’s ability” to sue and run a business.

We wrote in November when a judge “authorized marshals to seize Righthaven’s property.” Also in November, Righthaven announced it could go bankrupt

UPDATE: 12/27/2011 3:55 PM EST: Vegas Inc reported yesterday that Righthaven’s website address, www.righthaven.com, is now on the auction block and will be up for sale until Jan. 6.