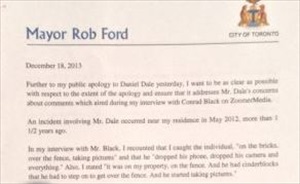 As iMediaEthics has reported, last week, Dale sent libel notices to both Ford and ZoomerMedia over Ford’s comments on ZoomerMedia’s VisionTV suggesting Dale was a pedophile. When describing an incident in which Dale says he was on public land next to Ford’s house reporting a story, Ford claimed:

“The worst one was Daniel Dale in my backyard taking pictures. I have little kids. When a guy’s taking pictures of little kids, I don’t want to say the word, but you start thinking, you know, what’s this guy all about?”

Ford apologized in a city council meeting earlier this week for his comments, but Dale labeled that apology insufficient because it wasn’t a full retraction and instead pushed the responsibility for his remarks on others, claiming the media misinterpreted him.

Last night, though, Dale tweeted that he has decided against pursuing his action given Ford’s second apology.

That second apology, on Dec. 18, was much more detailed and admitted he was wrong. Ford said that his “recollection of the incident is inaccurate” because he had no first-hand knowledge of what he said, and was just “recounting what I had initially been told by a neighbor.”

“There was no basis for me to say that Mr. Dale was ever in my backyard or on my property and I should not have said that. Accordingly, I apologize to Mr. Dale for the inaccurate manner in which I described the incident of May 2012,” Ford went on.

“Finally there was absolutely no basis for the statement I made about Mr. Dale taking pictures of children, or for any insinuations I made. I should not have said what I did and I wholly retract my statements and apologize to Mr. Dale without reservation for what I said.”

(Ford’s full statement is published on the Toronto Star’s website.)

“We are pleased to see that Mayor Ford has responded to the libel allegations by Mr. Dale by offering a full apology and retraction of his comments.  We have always believed that this was primarily a matter between Mr. Dale and Mr. Ford. However, we sincerely regret the part ZoomerMedia played in broadcasting the offending words spoken by Mr. Ford, and apologize for that. We can confirm that those words will never again be broadcast on any of our television outlets or websites.”

Dale responded to both apology statements: “I sincerely appreciate Mayor Ford’s complete retraction and unqualified apology, and I’m very glad the truth is no longer in dispute,” he tweeted.

“I won’t be taking legal action against the mayor, and I’m looking forward to getting back to work,” Dale wrote.

He added of ZoomerMedia’s statement. “I appreciate Zoomer’s statement. While it’s hard to understand how the mayor’s comments made it to air, I won’t be taking legal action.”