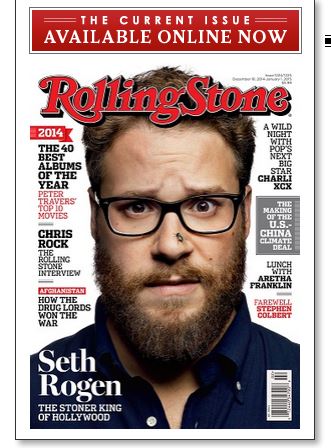 The current issue of Rolling Stone

Rolling Stone has amended its online apology for its report “A Rape on Campus” about accusations of rape at the University of Virginia.

The Friday apology confirmed that Rolling Stone didn’t contact the students at Jackie’s request and also seemingly put the blame on Jackie for “discrepancies” in her story as told to Rolling Stone. The apology came after the Washington Post interviewed and fact checked Jackie’s account. The Post found conflicting information — for example, the Post said that the person Jackie said brought her to UVA’s Phi Kappa Psi’s fraternity house wasn’t a member of that fraternity and said he never met Jackie.

The new apology from Rolling Stone, signed by managing editor Will Dana, revised its earlier apology, which suggested it was Jackie’s fault there were problems with the story, as opposed to being Rolling Stone‘s fault for not fact checking, the Post’s Erik Wemple reported.

“We published the article with the firm belief that it was accurate. Given all of these reports, however, we have come to the conclusion that we were mistaken in honoring Jackie’s request to not contact the alleged assaulters to get their account,” Dana wrote.

He went on that “these mistakes are on Rolling Stone, not on Jackie.” The earlier apology said, “In the face of new information, there now appear to be discrepancies in Jackie’s account, and we have come to the conclusion that our trust in her was misplaced.”

If you break the most basic rule of journalism, that’s on you, @rollingstone. Not the victim. http://t.co/cXjN0SIj8b pic.twitter.com/P43n4Rn2L6

Poynter reported that Erdely’s editor Sean Woods “will remain with the magazine,” according to a Rolling Stone spokesperson.

In addition, one of the three friends Jackie said picked her up after the alleged rape told the Washington Postthat neither Erdely nor anyone else at Rolling Stone  interviewed at least one of those three people, identified as “Cindy.” Cindy disputed the account of the night as well, denying to the Post that Jackie was hurt or bleeding and saying that Jackie didn’t say she was gang raped.

“Last month, Rolling Stone published a story entitled A Rape on Campus which described a brutal gang rape of a woman named Jackie during a party at a University of Virginia fraternity house, the University’s failure to respond to this alleged assault – and the school’s troubling history of indifference to many other instances of alleged sexual assaults. The story generated worldwide headlines and much soul-searching at UVA. University president Teresa Sullivan promised a full investigation and also to examine the way the school investigates sexual assault allegations.

“Because of the sensitive nature of Jackie’s story, we decided to honor her request not to contact the man who she claimed orchestrated the attack on her nor any of the men who she claimed participated in the attack for fear of retaliation against her. In the months Erdely reported the story, Jackie said or did nothing that made her, or Rolling Stone’s editors and fact-checkers, question her credibility. Jackie’s friends and rape activists on campus strongly supported her account. She had spoken of the assault in  campus forums. We reached out to both the local branch and the national leadership of Phi Psi, the fraternity where Jackie said she was attacked. They responded that they couldn’t confirm or deny her story but that they had questions about the evidence.

“In the face of new information reported by the Washington Post and other news outlets, there now appear to be discrepancies in Jackie’s account. The fraternity has issued a formal statement denying the assault and asserting that there was no “date function or formal event” on the night in question. Jackie herself is now unsure if the man she says lured her into the room where the rape occurred, identified in the story, as “Drew,” was a Phi Psi brother. According to the Washington Post, “Drew” actually belongs to a different fraternity and when contacted by the paper, he denied knowing Jackie. Jackie told Rolling Stone that after she was assaulted, she ran into “Drew” at a UVA pool where they both worked as lifeguards. In its statement, the Phi Psi says none of its members worked at the pool in the fall of 2012. A friend of Jackie’s (who we were told would not speak to Rolling Stone) told the Washington Post that he found Jackie that night a mile from the school’s fraternities. She did not appear to be “physically injured at the time” but was shaken.  She told him that that she had been forced to have oral sex with a group of men at a fraternity party, but he does not remember her identifying a specific house. Other friends of Jackie’s told the Washington Post that they now have doubts about her narrative, but Jackie told the Washington Post that she firmly stands by the account she gave to Erdely.

“We published the article with the firm belief that it was accurate. Given all of these reports, however, we have come to the conclusion that we were mistaken in honoring Jackie’s request to not contact the alleged assaulters to get their account. In trying to be sensitive to the unfair shame and humiliation many women feel after a sexual assault, we made a judgment – the kind of judgment reporters and editors make every day. We should have not made this agreement with Jackie and we should have worked harder to convince her that the truth would have been better served by getting the other side of the story. These mistakes are on Rolling Stone, not on Jackie. We apologize to anyone who was affected by the story and we will continue to investigate the events of that evening.”

iMediaEthics has written to Rolling Stone‘s Dana for more information.