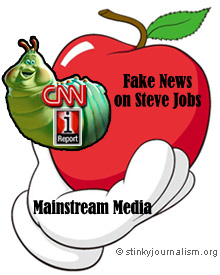 Mainstream media (MsM) has tried to blame bloggers for the publication of a false rumor that made Apple stocks tumble.

Callen continued, “Apple shares fell as much as 5.4 percent after the post on CNN’s iReport.com and rebounded after the Cupertino, California- based company said the story was false. CNN quickly disabled the user’s account and said it tried unsuccessfully to contact the individual.”

However, Greg Sandoval , CNet, reported the real story. It wasn’t bloggers fault. “The real reason it [the fraudulent story] gained traction is the reporting of it on mainstream blog sites.”

Sandoval continued. “What hasn’t been widely circulated yet is that iReport was not the first place the fake story was sent. Arnold Kim, who operates the blog, MacRumors.com, wrote Friday that someone submitted the same rumor to his site using an anonymous IP address. Kim did some research on the rumor and decided it was a fake.”

“Kim from MacRumors argues,” Sandoval said, ” that it was SAI’s post that gave the rumor credibility and spooked Wall Street. ‘ The (iReport) story has been picked up by numerous sites as a failure of citizen journalism,’ Kim wrote. ‘ It’s nothing of the sort. The real reason it gained traction is the reporting of it on mainstream blog sites.’ “

The time line proves MsM –not bloggers– gave an unverified rumor oxygen by re-printing it from a mainstream media owned site–CNN iReports. CNN benefits from iReports, but unlike CNN employees’ content,  they claim they have no responsibly for accuracy. Bloomberg quoted CNN’s response to the debacle : “CNN has no plans to review its procedures for placing content on the iReport Web site.”

” The user can generate whatever they want to. It’s now up to the consumer to decide if they want to USE that media. Once you get into the user-generated realm, journalism ethics are going to very hard to apply to every user out there.”