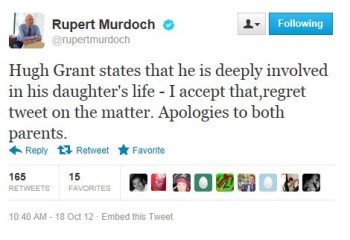 “Hugh Grant states that he is deeply involved in his daughter’s life – I accept that, regret tweet on the matter. Apologies to both parents.”

The Guardian explained that Murdoch had tweeted Oct. 17:

According to the Guardian, Murdoch tweeted in response to someone asking him “Scumbags? And your journalists and executives are what?” that

“They don’t get arrested for indecency on major LA highways! Or abandon love child’s (sic).”

iMediaEthics wrote earlier this month about “sixty victims of phone hacking and other press abuses,” including Grant, who sent a letter calling on UK Prime Minister David Cameron to “consider the recommendations of Lord Justice Leveson,” of the Leveson Inquiry into press standards and practices, as we wrote.