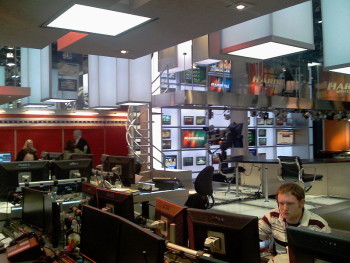 MSNBC apologized for broadcasting a close-up image of Syed Farook’s mother’s driver’s license and photographs of unidentified people. Farook and his wife, Tashfeen Malik, are the suspected San Bernardino shooters. MSNBC said in a statement about its actions:

“MSNBC and other news organizations were invited into the home by the landlord after law enforcement officials had finished examining the site and returned control to the landlord. Although MSNBC was not the first crew to enter the home, we did have the first live shots from inside. We regret that we briefly showed images of photographs and identification cards that should not have been aired without review.”

“A CBS reporter, live on CBSN, explained he would not show closeups of personal material–and would not even touch anything, as it was private property,” TV Newser reported.

Fox News echoed CNN’s previous statement, telling TV Newser: “After receiving permission by the landlord, and after the FBI investigation, we entered the suspect’s home to report on what we saw. We exercised cautious editorial judgement and refrained from showing close-ups of sensitive information, including specific identifications and photographs.”

The Society of Professional Journalists’ ethics chairman Andrew Seaman weighed in on the press coverage of the apartment.

“Journalists should feel free to investigate stories when and where possible,” Seaman said in a statement. “They need to minimize harm in their reporting, however. Walking into a building and live broadcasting the pictures, addresses and other identifying information of children or other people who may have no involvement in the story does not represent best and ethical practices.”

Vital reminder of perils of live TV news: Why show images of shooter's home without editorial discretion? I mean, is this Capone's vault?

The Washington Post‘s Erik Wemple argued: “What’s craven about the MSNBC treatment is the live airing and narration. It adds nothing and trivializes everything. This is a case in which MSNBC, being a cable network, had time to fill and a live opportunity on a hot story — and just decided to go for it. In doing so, it put itself in a situation where it encountered editorial calls more quickly than they could be processed. [CNN’s Kerry] Sanders was just having a ball in there, chatting about baby toys and quite possibly invading the privacy of innocent people.”