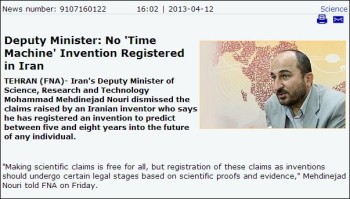 Is this an example of Iran’s weird science? Fars News Agency, which has ties to the Iranian government, unpublished an April 8 story claiming Iranian Ali Razeqi created a “time machine,” but not before countless news sites spread the tale.  As the Washington Post summarized, his invention “could fit into a computer case and predict a person’s marriage age, education, occupation and number of children just by their touch,” but wasn’t supposed to actually time travel.

Despite Fars News unpublishing the original story, Razeqi’s invention claim made it to many news sites. The Telegraph reported on Fars News Agency’s initial interview with Razeqi, without any apparent independent fact checking.  Its April 10 story quotes from and cites Fars News Agency’s article — for example, Razeqi is quoted as saying the machine “will not take you into the future, it will bring the future to you.”

From there, many other media outlets reported on Razeqi’s sensational invention, but haven’t updated or corrected to acknowledge the denials of the story and Fars News’ unpublishing. As of April 13 at 11:15 PM EST, news outlets that haven’t corrected include:

But, a few outlets have acknowledged that the story is too good to be true.  For example, Wired added an update to its story that reads:

“Caitlin Dewey of The Washington Post reports Fars deleted the story after the Telegraph ran with it, and Josh Keating of Foreign Policy wonders if the story was ever genuine. Presumably this is all evidence that now the Iranians are able to travel back in time, not just discern the future.”

“UPDATE: Iran’s Deputy Minister of Science, Research and Technology Mohammad, Mehdinejad Nouri, on Friday denied that Razeghi has registered his ‘time machine’ with the State Organization for Registration for Strategic Inventions. The original report about the technology was pulled from an Iranian news agency website, the Washington Post reported.”

iMediaEthics has written several times about fabrication in Iran’s media, specifically at Fars News Agency.  In February, Fars doctored an image of Michelle Obama presenting an Oscar award to cover her shoulders and arms. Also in February, Iran’s Khouz News was accused of publishing a doctored image of a fighter jet flying above mountains.

And in October, Fars re-published The Onion’s satire story about Mahmoud Ahmadinejad without credit.  The story, for which Fars later apologized, claimed that a Gallup poll found “rural whites prefer Ahmadinejad to Obama.”