Scottish Politician Tommy Sheridan gets to Keep £200,000 News of the World Defamation Verdict 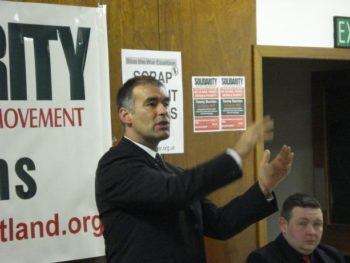 Scottish politician Tommy Sheridan gets to hold on to the  £200,000 defamation payout he was awarded from the now-closed UK newspaper News of the World in 2006.

Back in 2006, Sheridan won his defamation lawsuit against News of the World, which was famously shut down in 2011 amidst growing claims of phone hacking, for publishing claims he cheated and went to a swingers’ club, as iMediaEthics previously has reported.

But in 2010, Sheridan was convicted of perjury when he was testifying in the defamation case, which he denies. Making the matter more complicated, Andy Coulson, the former News of the World editor and former communications director for former UK prime minister David Cameron, was charged with and acquitted of perjury for his testimony during Sheridan’s 2010 case. Coulson was convicted of phone hacking.

After that perjury conviction, the News of the World‘s publisher, News Group Newspapers, tried to get the defamation money back by attempting to appeal the 2006 verdict. However, this month Scottish judges dismissed the News Group Newspapers’ attempt to appeal the 2006 verdict. “A written summary of opinion issued on Friday by Lady Paton, Lord Drummond Young and Lord McGhie said the reasoning of the 2006 jury had not been not undermined,” the Guardian reported.

A spokeswoman for News UK told iMediaEthics by e-mail, “We are disappointed by today’s outcome of our appeal given Mr Sheridan’s criminal conviction for perjury in giving his evidence to the Court in the original libel trial. We are now considering all our options”.

The judges ruled that the 2006 jury could have not believed Sheridan’s claims but find that, regardless, News of the World defamed him. The ruling explains:

“Thus it was open to the jury to disbelieve some of Mr Sheridan’s evidence, to find certain evidence led on behalf of NGN established, yet still to conclude that Mr Sheridan had been defamed. Several lines or routes of reasoning had been open to the civil jury, at least one of which was not undermined by the perjury conviction or by the three new items relied upon by NGN.”

Scottish Politician Tommy Sheridan gets to Keep £200,000 News of the World Defamation Verdict