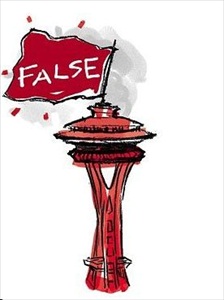 While the public schools “have long noted only 17 percent of students” were prepared for college requirements, apparently as much as 46 percent of high school students are prepared. The low, and incorrect, percentage allowed the district to exaggerate a problem that needed no exaggeration and further compound already shaky public relations,” the Seattle Times wrote in an editorial.

See here, the Truth Needle’s Nov. 21 analysis of the claims.   In it, Seattle Times’ education reporter Linda Shaw, noted that the public schools used the 17 percent statistic “starting in 2008,” but then “the district quietly quit using that number then recently revised it, without comment, to 46 percent.”

According to the Seattle Times, the district’s 17 percent statistic really described the number of students who they projected to  “succeed in four-year colleges, not just get admitted.”

The Truth Needle report quoted superintendent Maria Goodloe-Johnson as saying the faulty statistic description was a mistake.  Also, school board president Michael DeBell reportedly explained he had doubts about the figure.  Ultimately, Seattle Public Schools district research director Brad Bernatek is reported as saying he didn’t generate the statistic correctly and that he “didn’t communicate…well enough”  why the 17 percent statistic was no longer being used.

Truth Needle also explained that the statistic was used as part of a package of statistics which was used by the district to push for changes to the district.

See all of the Truth Needle’s fact checks here.

Seattle Public Schools was also the center of a controversy over bloggers earlier this year. Just last month, we wrote about Seattle blogger Melissa Westbrook, who was reportedly told by that public school system that she couldn’t ask questions at its news conference.  As a result, Westbrook called for the public schools to create a policy for media – both traditional and non-traditional – at news events.

At the end of the day, Westbrook said she was allowed to ask school officials questions at the news conference.  She also weighed in on the Truth Needle’s fact check and strongly criticized Seattle Public Schools.

StinkyJournalism has written to Linda Shaw of the Seattle Times and will update with any response.