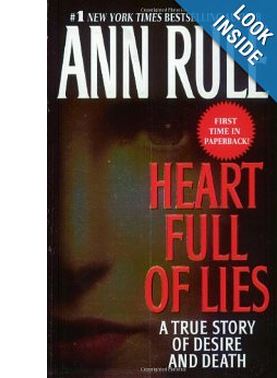 Author Ann Rule is suing Seattle Weekly for libel over its story on her book Heart Full of Lies. (Credit: Amazon, screenshot)

True crime writer Ann Rule is suing Seattle Weekly for libel over its 2011 cover story about her book, Heart Full of Lies.

The true crime book focused on a woman named Liysa Northon, who was convicted for killing her husband. Northon “pleaded guilty in July 2011…to first-degree manslaughter in the Oct. 9, 2000, shooting death of her husband,” the Oregonian reported.

Seattle Weekly’s article accused Rule, whose website states she’s “published 33 books” since 1969, of publishing “a series of mistakes and false conclusions” in the book.

But, what Seattle Weekly didn’t disclose in its 2011 report on the book is that the author of its article, Rick Swart, was engaged to Northon, the convicted killer at the heart of the book. Seattle Weekly‘s freelance reviewer, Swart, didn’t tell the paper about his relationship with Northon.

After the paper found out about Swart’s relationship with Northon, it added an editor’s note, as iMediaEthics wrote at the time. Swart and Northon did end up getting married back in 2011, according to the Oregonian, and she was released from prison late last year.

What the Article Said and How it Went Wrong

Hannan said that Rule had hinted at problems with the story and the conflict of interest with a note on her website saying there was a “back story concerning the article’s author.” Hannan then reached out to Swart to ask what happened but didn’t find out until the next day that he had a relationship with Northon. Also after the article was published, Northon publicly labeled Swart her fiancee with a post on her website.

Hannan went on to explain that he had worked with Swart to edit down the report before publication. “All along, he swore to the veracity of the facts his article contained — facts that were backed up by primary documents and interviews — and his true reason for writing Liysa’s story: He was just a curious journalist who’d found a great yarn,” Hannan wrote.

But, after his relationship with Northon was exposed, Swart defended his failure to alert the paper to the inherent conflict of interest by arguing that he’s just a freelancer who’s used to writing for “community newspapers where we write about people we know, people we have relationships with, all the time.”

However, Seattle Weekly’s Hannan dismissed that excuse saying it’s mandatory to disclose “if you’re writing about your fiancee, or anyone with whom you have a relationship.” While Swart maintained his story is factual and that he compartmentalized his “personal life,” Hannan said that “it’s now clear that our philosophy and Swart’s differ” and that Seattle Weekly would be “double and triple-checking the facts” in Swart’s review.

Seattle Weekly published a list of the many errors the paper found in Swart’s story including mis-identifying Northon’s father’s name and wrongly saying Northon is a “certified yoga instructor.”

Hannan went on in his defense of the paper:

“We do our best to avoid getting even one detail wrong. So it’s with no great pride that we have to list these half-dozen that are either incorrect or misleading. Yet in double-checking Swart’s story, we were able to at least confirm the accuracy of some of the facts supporting his main argument.”

Seattle Weekly also included various documents to support Swart’s reporting, when it was right, including “a ruling from a judge.”

Anne Bremner, who is the author’s attorney, told iMediaEthics by email that ” trial is tentatively set for September 29, 2014″ and that she thinks her client, Rule, has a strong case:

“Concerning the substance of the lawsuit, generally the hardest part is proving the legal term of art, ‘actual malice.’  That can be done in two ways.  First, if the speaker knows something is false and publishes it anyway, or second, if the speaker is so careless that they have “reckless disregard” for whether the statement is true or false.

“I don’t think Ann is going to have a very high hurdle here.  The article’s author, Rick Swart, almost makes her case for her – he can’t help himself from making personal attacks against Ann in his article, and in a clever turn of phrase, says she has a ‘heart full of lies.’  Anyone can see that’s not legitimate journalism.

“The Seattle Weekly fares no better – they admit on their own website to not vetting Swart’s story.  The editor spent time shrinking the story to fit in a weekly paper, but never checked the facts or even checked out Swart.  That’s reckless disregard for the truth.”

iMediaEthics reached out to Seattle Weekly about Rule’s lawsuit. We were sent a statement from the president of the newspaper’s owner Sound Publishing, Gloria Fletcher. Fletcher’s statement reads:

“The article in question was published prior to our ownership. At the time Seattle Weekly was owned by New Times Media. Sound Publishing has not been served with any complaint.”

In a related story, the Associated Press issued a July 24 correction to its report on Rule’s lawsuit against Seattle Weekly after mis-identifying one of Rule’s books. The AP correction reads:

“In a story July 23 about true-crime author Ann Rule’s defamation lawsuit against the Seattle Weekly newspaper, The Associated Press misstated the title of Rule’s book about serial killer Ted Bundy. It is ‘The Stranger Beside Me,’ not ‘The Killer Beside Me.'”