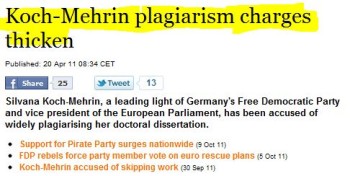 A second German politician has been accused of plagiarism and has left political office. Silvana Koch-Mehrin resigned from her post as European Parliament vice president, the Free Democratic Party’s board, and the political party’s chairperson, the Toronto Star reported.

She was accused of plagiarizing her doctorate thesis for Heidelberg University.  Earlier this month, the University of Beyrouth announced the results of its investigation into charges of plagiarism against Karl-Theodor zu Guttenberg for his doctoral thesis. The university found that he “intentionally” plagiarized.

ITV host: 'no scientific evidence' to link coronavirus & 5G
Why CBC says documentary on Trial co-produced by lawyer's daughter not conflict of interest