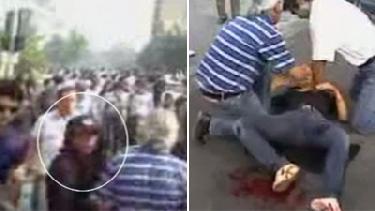 IS THIS NEDA BEFORE AND AFTER SHOOTING? Sky News post the above screen shots with the caption: "Video appears to show Neda Agha Soltan in the crowd with her music teacher."

While news about Neda Agha Soltan’s tragic death on the streets of Iran evoke global shock and sadness, questions also arise about the authenticity of the video.

UK’s Sky News posts a second video that seems to support the authenticity of the original video circulating the Internet. The video footage shows a woman and a man, with the same clothing and physical appearance as Neda and her music teacher.

Sky News writes: “Neda Agha Soltan’s death was captured on camera and spread quickly around the internet, making her a symbol of the opposition movement. Now a grainy clip has been published online which appears to show her in the crowd just before she was fatally injured. She is seen in a crowd alongside the man who later nurses her as she dies in the street.”

Even though Sky News warns in bold letters above an embedded video : “Sky News Cannot Check Accuracy Of This Video,” I found the new video persuasive when I compared it to the now infamous original video showing Neda on the ground in the tragic aftermath of her shooting. The original video, also found in the Sky News post, does not show the same large crowd as in the second footage. However, the same clothing and physical appearance of the music teacher and young woman is striking.

Since the news reports from Iran is limited and politically charged– with the possibility of propaganda emitted from both sides–any credible, additional information, such as this second footage posted by Sky News, is helpful.

Sky News announced June 19, that they were just named “Best News Service at the Broadcast Digital Awards.” They write, “Sky News emerged victorious because the judges felt that it broke more stories than any other entrant this year”–a “short list” that included CNBC.

Sky News’s use of a cautionary tone in their posting of this second Neda video is admirable. The footage certainly adds depth and verification to the international story’s coverage not found on their competitor TV news channels’ Web sites.