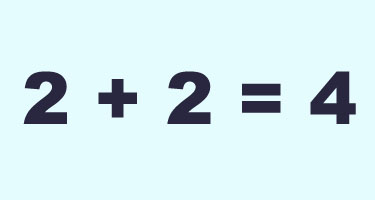 Should reporters have to use a "computer" to do simple math?

As errors go, scientific and mathematical ones are often some of the easiest for journalists to make.

Writers, more often trained in the humanities, might be forgiven for messing up science stories they themselves don’t really understand.

But ignorance is a poor excuse for truly basic errors because accuracy is arguably even more important in math and science than it is, for example, in name spelling. (Consider the difference between mistaking Mr. Baxby for Mr. Boxby vs. mistaking 50 for 50,000,000).

StinkyJournalism has written before about the importance of simple math skills. This month, we noticed the corrections posted by Slate magazine on January 29, which serve as good examples of areas in need of greater journalistic care.

Three of the seven corrections feature math/science errors and all are relatively simple mistakes.

In a Jan. 27 “Slatest” item, Jessica Loudis incorrectly stated that the total number of airline passengers in 2009 was the lowest since World War II. The percentage decline was the largest.

Here the reporter gets the gist right–2009 was a superlative year in terms of low numbers of airline passengers–but mistakenly cites the end number as what was superlative rather than the trend itself. In the context of the following errors, this one seems the most understandable math mistake. (Slate’s link to this story is incorrect and StinkyJournalism has been unable to find the original story online.)

In another Slate correction, one can see how a small omission error can cause a huge change in a science story:

In a Jan. 26 item in “The Slatest,” Meredith Simons stated that the shell of radiation from the Earth’s analog signals once spread 50 million light-years in every direction. It is 50 light-years.

Fifty million is very different than 50. In a non-science story a journalist might misspell the name of a town, leading readers to think a news story happened in a place 100 miles away from where it actually did. But in this piece, Simons missed the mark on the location of this radiation shell by 49,999,950 light-years.

A third correction raises another question: should we expect reporters’ “brains” to be able to do basic arithmetic?

In the Jan. 26 “Human Nature” on the importance of computers, William Saletan noted that in the week after Haiti’s earthquake, a campaign for $10 text-message donations to the Red Cross raised $25 million. Relying on his own brain, Saletan then calculated the number of responses as 250,000. He should have used a computer. The correct numbers is 2.5 million.

Slate excuses Saletan’s twitter calculation error as the fault of the author using his “brain.” However, a computer or a calculator aren’t necessarily the best tool for catching these problems. (We write about the issue of relying on software to do the job of copy editors more here.) It can be harder to divide millions on a calculator (too many zeros) than it is in your head, on your fingers or on a piece of paper.

Also consider what a thorough numeric fact check (conducted by a human, not a computer) could have done for these stories. The first error cited above about passenger trends might have still been missed, but the third and second would have been easy to verify–respectively, Saletan’s with a pencil and paper, and Simmons‘ with a quick check of the scientific literature itself.

StinkyJournalism has contacted Slate to ask about why they discussed this error as the fault of Saletan using his brain rather than a “computer” (sic-calculator?), when a brain itself should have easily sufficed to prevent the error.  We will update with any response.