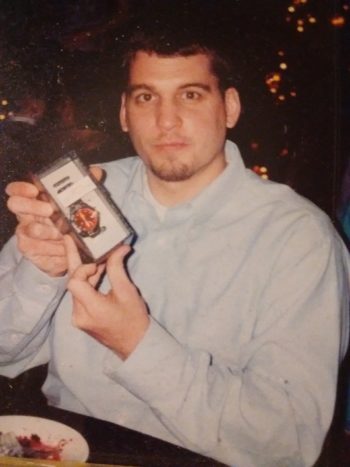 EDITOR’S NOTE: A year ago today, a 41-year-old man named Joseph Koscinski died. Pennsylvanian newspaper The Sharon Herald sensationalized his suicide, dredged up his criminal past, and graphically detailed how he died, without apparent thought of best practices in reporting on suicide. The Sharon Herald story is a case study in what not to do when suicide is in the news.

A Sharon Herald reader sent the newspaper’s story to iMediaEthics which led to iMediaEthics writing a commentary about the best practices for reporting on suicide. For verification steps in our report, we contacted Koscinski’s mother for her thoughts, confirming the newspaper never contacted her before or after its publication. “I’m hurt. I’m angry, I’m disgusted with a newspaper that has no respect for human life…most especially my son’s life, ” Betty Koscinski, told iMediaEthics at the time.

On the one-year anniversary of Koscinski’s death, iMediaEthics is publishing his mother’s perspective of what she wishes the public knew about her son and his life, instead of the gruesome details of his death. iMediaEthics abridged an article that Koscinski’s mother wrote which shares the story of her son’s life. iMediaEthics recently contacted the Sharon Herald again to ask if the newspaper has changed its practices for reporting on suicide since receiving complaints about coverage of Koscinski’s death.

Publisher Sharon A. Sorg told iMediaEthics by e-mail today, “When it comes to reporting suicides The Herald policy continues to be to report suicides when either it involves a public official or when the suicide is committed in public and requires first responders to the scene. Following the Koscinski suicide story, we reaffirmed with our newsroom staff the need to be more aware of what details need to be included in such stories.” iMediaEthics has asked Sorg if the paper has or will apologize to the Koscinski family regarding last year’s story but hasn’t heard back.

At this point, I was pacing. “What is wrong? Did something happen to my son?” There was a long pause and then he said, “Yes ma’am, your son is dead.” A suicide, I heard someone say in the background.

My son Joe was so much more than the man that was described in the Sharon Herald’s front-page story, “Man jumps to death off viaduct.” He was someone’s friend, someone’s student, someone’s brother, someone’s son.

The word spread so quickly through social media the day he died. My daughter was out shopping and heard it from a policeman. She came racing home to be with us. The unmistakable look on her face made me know she already knew. “No, no, no!” I screamed over and over.

The rest of that day is a fog. I remember the coroner coming to the house accompanied by a detective who assured me there had been no foul play and that Joe had not suffered. Relatives stopped by, Father Jeff came. Neighbors came and went bringing food. My husband sitting frozen in a chair across from me. It was so surreal, like I was watching a movie, only I was in it.

I want my son Joe to be remembered for more than the way he died. I want him to be remembered for the way he lived his life and how he courageously battled mental illness for almost half his life. Nothing, nothing could have prepared me for Joe’s death. I hope by sharing our story, Joe’s story, that when you know of someone who suffers from mental illness that you won’t judge them.

One of six children, Joe was a beloved son. He was a caring, loving and devoted friend. He was an intelligent man, full of life. As a child, he was curious, energetic, mischievous, and “happy go lucky.” He had tons of friends, an active social life and knew how to make people laugh. He fought a daunting disease for more than twenty years and he did everything he could, day in and day out.

Joe’s mental illness first appeared to rear its head when he was a sophomore at Slippery Rock University, following a terrible accident that almost killed him. After that fall, Joe’s troubles began. He fell into a deep depression and was forced to take a medical leave of absence from the university. We sought treatment right away. His mental illness came on gradually but worsened as time went on.

Thus began Joe’s journey (actually, our journey) battling mental illness. Joe later pulled himself up by the bootstraps and graduated with honors from the New Castle School of Trades, obtaining an associate degree as an electrical technician. But this feeling of accomplishment was short-lived because he fell back into a depression while traveling alone for work.

A few years ago, we thought we had found a panacea, a cure, if you will, in a new medication that left Joe seemingly symptom-free. It was so wonderful to see him be himself, but gradually, his condition returned.

During the last couple years of Joey’s life, he appeared anguished, scared and depressed. He didn’t want us to worry. He wanted so much for us to enjoy life, to travel, and to do all the things that we loved doing.

The night before Joe died, he and his dad watched some basketball and he spent the night. The next morning, he and his dad went for a walk before going grocery shopping. Around noon, we had brunch together as a family. I can still picture it. He cleared the table and we washed the dishes together. “Thanks, Mom,” he said. Afterwards, he watched baseball with his dad.

Later I noticed he was gone. “Where did Joe go?” I asked my husband. We assumed he went back to his home and didn’t worry because typically Joe would not stick around very long.

A year later, I am still reeling from the shock and pain of losing my son. This was not just Joe’s battle, it was our battle as well. Time and time again when he landed in a hospital near and far, we were there by his side. Right up until he died, he knew we were there for him. Likewise, Joe never missed an opportunity to tell us that he loved us and appreciated us.

For me, talking about Joe, sharing his story is healing and therapeutic. Maybe some of you know someone who is suffering from mental illness. Telling Joe’s story, our story, is my hope that somebody out there knows they are not alone if they have to go through what we’ve been through.

The charity the American Foundation for Suicide Prevention has information for people needing help here.