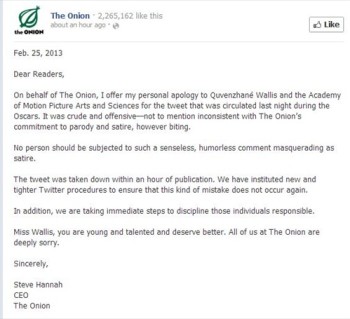 Satire site The Onion apologized today for its “senseless, humorless comment” about Quvenzhane Wallis, who was a nominee for last night’s Best Actress award at the Oscars.

As Gossip Cop reported, last night The Onion tweeted the “c-word” about the 9-year-old star of Beasts of the Southern Wild.  The tweet, which was quickly deleted, read:

“Everyone else seems afraid to say it, but that Quvenzhané Wallis is kind of a c**t, right?”

But on Facebook today, The Onion‘s CEO, Steve Hannah, apologized for the “crude and offensive” comment and said it will “discipline those individuals responsible.”  The apology reads:

“On behalf of The Onion, I offer my personal apology to Quvenzhané Wallis and the Academy of Motion Picture Arts and Sciences for the tweet that was circulated last night during the Oscars. It was crude and offensive—not to mention inconsistent with The Onion’s commitment to parody and satire, however biting.

“No person should be subjected to such a senseless, humorless comment masquerading as satire.

“The tweet was taken down within an hour of publication. We have instituted new and tighter Twitter procedures to ensure that this kind of mistake does not occur again.

“In addition, we are taking immediate steps to discipline those individuals responsible.

“Miss Wallis, you are young and talented and deserve better. All of us at The Onion are deeply sorry.