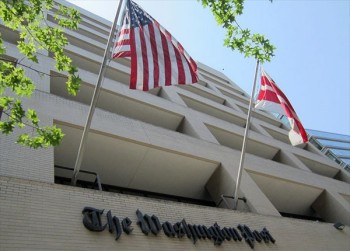 The Washington Post unpublished 2,000 words of an article about HIV diagnoses after learning its source made up his story.

In an editor’s note at the top of the article, the Post explains its source faked information he told the newspaper.

The article focused on the “troubling disparity in HIV diagnoses.” The August 4 story by Jeff Guo was headlined, “The black HIV epidemic: A public health mystery from Atlanta’s gay community.”

The source, Mickyel Bradford, lied when he told the reporter a conversation he said he had about being tested for HIV and other events. The editor’s note reads:

“Editor’s note: Several passages have been removed from this story because the source of those passages, Mickyel Bradford, has admitted to fabricating them. The passages include descriptions of a lunch in Bradford’s town and a ball that Bradford claimed he attended with a man identified as Seth. Bradford now confirms that neither of those events occurred as described. Additionally, Bradford admits the two men never discussed getting tested for HIV. All passages concerning the two men have been removed.”

The Washington Post editor responsible, Jim Tankersley, told the Post‘s Erik Wemple that the newspaper found out Bradford deceived them when someone who knew Bradford contacted them. When confronted with information provided by this person, Bradford “immediately admitted that he fabricated a few parts of the story,” Tankersley said to Wemple.

The Post’s Wemple further noted another problem with the article as it was written in the present tense, which could have further duped readers into believing the Post‘s reporter was with Bradford when the alleged incidents happened.

A Google Search for Mickyel Bradford produces someone in Georgia who identifies himself on LinkedIn as “a healthcare advocate with experience supporting marginalized communities and people living with HIV/AIDS”  iMediaEthics has written to Bradford for confirmation he is the source and for more information about why he fabricated his story.

We’ve also written to the Post’s reporter for comment.