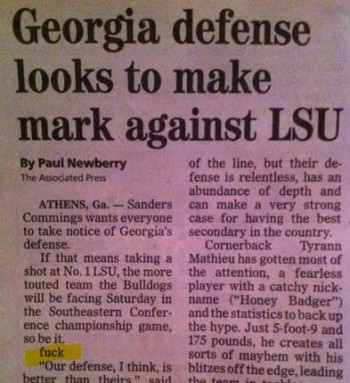 The expletive was inserted apparently randomly in an Associated Press sports article in between the second and third paragraph of the story. The article, “Georgia Defense Looks to Make Mark against LSU,” is written by the Associated Press’s Paul Newberry. The article does not appear to be published on the Greenville News’ website. See above, a screenshot of the article.

The Greenville News is a daily newspaper owned by Gannett. It has a circulation of about 55,000 copies, according to Mondo Times.

We have written to Greenville News managing editor Chris Weston and sports editor Bart Wright asking how the expletive made it into print, if the newspaper will publish a correction or apology, and for any more information regarding this incident. We will update with any response.

UPDATE: 12/1/2011 2:55 PM EST: Greenville News executive editor John Pittman told StinkyJournalism by e-mail: ” I was shocked and saddened to read this and I assure you the responsible party will be held accountable.  I apologize for this appearing in your newspaper.”

UPDATE: 12/1/2011 5:10 PM EST: Greenville News executive editor John Pittman issued a public apology on the newspaper’s website here.   In the notice, Pittman apologizes “to our readers and the reporter whose name appeared over the story.”  He did not say who was responsible for inserting the word, but said that the newspaper “will deal appropriately with it.”