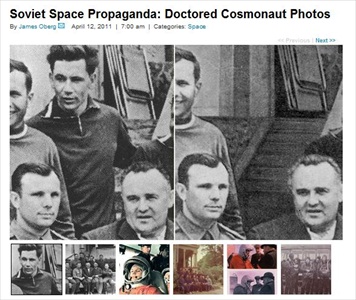 Compare the original unaltered photo (left), with the official released photo from the '70s (right), which airbrushed people out of the scene. (Credit: Wired)

Former NASA scientist James Oberg claimed in an article for Wired that a set of 1970s photos of cosmonauts, released at the height of the “space race,” were doctored.  According to Oberg, the photo doctoring has been revealed over time as Soviet scientists have re-released the photos, but unintentionally releasing the real original photos.

The version originally released to the public were doctored to remove “some individuals” from the images.  But, there’s no conspiracy theory or “secret space disasters” behind the doctoring, according to Oberg.  The men were “airbrushed” out of the images because they had “misbehaved and been expelled” from the space program, or were no longer medically qualified for space.

“Side-by-side publication of the forgeries sparked widespread mockery of the clumsiness of the Soviet lies. This led to a series of awkward attempts to explain the photos, that let slip even more information,” according to Oberg.