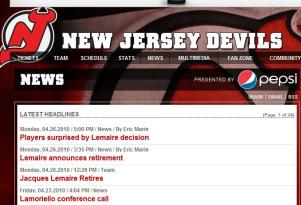 The Society for Professional Journalists’ Ethics Committee wrote that it is “dismayed” that some New Jersey Gannett newspapers have a New Jersey Devils employee reporting on the team.

The New York Times reported April 18 that some Gannett newspapers in New Jersey have been publishing articles written by Eric Marin, who works for the Devils’ Web site. Marin’s first article for the Gannett’s Asbury Park Press appears to have been on April 12.

“The public expects journalists to be ethical including fair and impartial — and holds us accountable when we fail,” ethics committee chairman Andy Schotz said in the SPJ release. “We hear constantly from people upset about eroding standards by news organizations.”

How can the public expect an article written about a sports team by that team’s employee to present an objective or balanced view?

The New York Times wrote that “while it may be a promotional coup for the team, it puts the papers in the odd position of publishing news coverage supplied by the entity being covered.”

The New York Times reported that Hollis Towns, executive editor of the Asbury Park Press, the largest of the six Gannett newspapers in the state, said that because the newspaper disclosed Marin’s employment, it’s OK.

“I think journalists get hung up on certain lines of what’s ethical more than the readers,” The New York Times reported Towns said.

However, it could also be argued that readers have become so jaded, or inured, to practices like this from newspapers that they don’t expect anything better from journalism.

The New York Times reported that using Marin’s writing was the Devils’ idea because they wanted more coverage in the newspapers.   Does that mean a news organization is allowing a business to determine what is covered?

Also, The New York Times reported that Gannett doesn’t pay for Marin’s articles and only plans to allow this type of “arrangement” with sports articles.

The SPJ statement said that Marin’s articles were labeled as “special” to the newspaper, and that after The New York Times article was published, a disclosure statement “Eric Marin works for the New Jersey Devils and writes for newjerseydevils.com” was added.

The SPJ wrote that “Disclosure is important, but doesn’t solve the powerful conflict of interest actual and perceived — of having figures or organizations in the news cover themselves.”

“As the Fourth Estate, the press shouldn’t abdicate its responsibilities to those with a vested interest in the news,” Schotz said in the release.

The SPJ reminded that its Code of Ethics says journalists should:
• “Distinguish between advocacy and news reporting.”
• “Distinguish news from advertising and shun hybrids that blur the lines between the two.”
• “Avoid conflicts of interest, real or perceived.”
• “Remain free of associations and activities that may compromise integrity or damage credibility.”
• “Deny favored treatment to advertisers and special interests and resist their pressure to influence news coverage.”

FanHouse wrote “In these days of shrinking news holes and smaller newsroom staffs, more and more media outlets are rethinking how to allocate their resources. Gannett’s decision with the Devils seems to be one of the worst approaches.”

We reported a similar case last year. The Hartford Courant found itself facing “harsh criticism over its decision to enlist the daughter of Geno Auriemma, the coach of the University of Connecticut’s defending championship basketball team, as a celebrity blogger.” The paper ultimately kept the blogger.