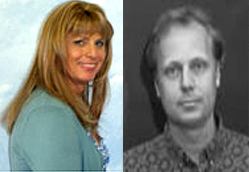 The above photos show the late former LA Times sports journalist, Mike Penner on right. His transformation into Christine Daniels, is on left. (Credit: Gawker)

As we discussed in an earlier post about National Public Radio coverage of White House chief of staff Rahm Emanuel, breaking style guidelines for one individual while maintaining them for everyone else can create an unfair and unintended sense of favoritism, or of disregard.

After the death of Mike Penner (also known publicly as Christine Daniels for about a year) this weekend, the issue has come up again in how different newspapers and magazines have chosen to eulogize the former Los Angeles Times sports writer, who came out as transgender and changed his name and public persona to female in 2007–becoming Christine Daniels–but went back to writing as Mike Penner in 2008. As with Emanuel, the safest ethical choice in this case would be to follow accepted style guidelines. But many who wrote about Penner’s death did not follow the accepted rule, Amanda Hess writes in a post on the Washington CityPaper blog “The Sexist.”

“Penner’s impermanent gender transition left obituary writers with an identity problem. Whose obituary to write: Mike Penner’s or Christine Daniels’?” Hess asks. “The decision to remember Penner as female in his obituary lies in direct opposition to a longtime cause of the LGBT movement: Ensuring that the mainstream media accurately represent the gender identity of transgender subjects. According to several professional style guidelines, writers are to use the gender identity, name, and pronouns preferred by the subject.”

Use the pronoun preferred by the individuals who have acquired the physical characteristics (by hormone therapy, body modification, or surgery) of the opposite sex and present themselves in a way that does not correspond with their sex at birth. If that preference is not expressed, use the pronoun consistent with the way the individuals live publicly.

Hess writes that since Penner chose to be Mike Penner in print as of 2008, and went so far as to erase the records of his writing as Christine, a male pronoun would be consistent with the way he lived publicly at the time of his death, and therefore the correct style choice. “Penner was a lifelong journalist, and it’s only fitting that his obituary writers follow the standards of the profession,” she writes.

However, several media outlets either intentionally or accidentally wrote obituaries not for Mike Penner, but for Christine Daniels, including Bitch Magazine and The Advocate.

There are reasons why writing about Mike as Christine has some ethical weight behind it. One is that a simple reference to Mike Penner fails to accurately describe the complexity of Mike’s/Christine’s persona. “It’s technically correct to refer to Penner as “Mike,” but that treatment fails to recognize Penner’s inner life… The media runs the risk of contributing to the widespread transphobia that likely played a role in Penner’s death,” Hess writes.

Moreover, it’s possible and even likely, that while Penner resumed a male persona in writing, she may have continued to identify as Christine internally.  Hess writes, “Given what we know about detransitioning, it’s understandable why the LGBT community and its allies would be reluctant to embrace Penner’s reclamation of his male persona, particularly in light of his apparent suicide.”

In a follow up to her original post, Hess quotes Bitch Magazine’s Anna Clark, who uses female signifiers to refer to Daniels in her article.  Clark says,

I used female pronouns in the Bitch piece because the only information I had was that she began writing under the Mike Penner byline–but I couldn’t find any explicit confirmation, in her words, that this indicated a full intent to de-transition, or even that she herself initiated the byline change and blog deletion. I think it’s safe to assume that she did initiate it, given her paper’s support of her previously, and it’s quite likely that she did intend to de-transition both on and off the sports page. But I didn’t feel comfortable writing about her with male pronouns without finding any facts that made this explicit.

But trying to weigh direct cues against indirect cues is a sticky business, and the byline change in 2008 back to Mike Penner, along with removal of Christine Daniels’ work from the Los Angeles Times website seems nothing if not direct. Once journalists start trying to delve into the unspoken motivations of the subject, and not the facts of the matter, we open the door to any number of interpretation of someone’s “true” gender. This is of course why we have style guidelines in the first place.

Hess quotes Autumn Sandeen, a trans activist who knew Penner when he was living as a woman and who eulogized Penner, but misses Daniels. “In my heart, I know her as Christine. In my job as a writer, I have to think of him as Mike,” she says. “In the end, he called himself Mike…Who am I to call him Christine?”

Writing about transgender subjects, to me, necessarily means embracing complexity. The general style is to use the pronoun and name that the person prefers and the best way to know this is to ask that person. Unfortunately, still too often we write about transgender people, often for the first time, only after they have died through violence or by their own hand. This means writing about people who often lived in a world somewhere in between the gender they were born with and the one in which they saw themselves in an ideal world.

It seems the most accurate and ethical path the take in this case is to call the late Los Angeles Times writer Mike Penner. But, at the same time, one must try to speak to the complexity of his life both as Mike and as Christine Daniels in ones’ coverage.

In Hess’ article Sandeen says, “I would love to remember him as Christine, but he didn’t give us that opportunity.”

Yet journalists always have the opportunity to contextualize and discuss facts, and the responsibility to do so when it is necessary to create a fair and balanced report. This will always be a tricky business especially when it comes to describing transgender individuals. But a fact-based approach following accepted guidelines from the transgender community coupled with sensitive and detailed contextualization seems a good rule of thumb.