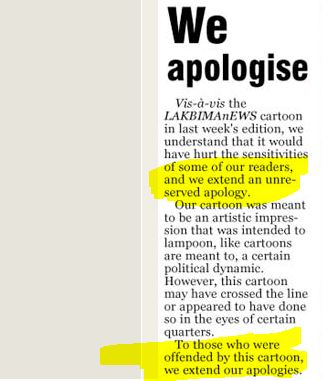 Sri Lankan newspaper Lakbima News apologized Sept. 16 for a Sept. 9 cartoon that was slammed as unacceptable.  The cartoon depicted “the Indian Prime Minister underneath an uplifted sari of the Chief Minister of Tamil Nadu and looking up,” as self-described “Sri Lanka’s first and international award-winning citizens journalism website” Groundviews.org explained.

Originally,the newspaper’s “acting editor” Ranga Jayasuriya tweeted about the cartoon Sept. 9 arguing that  “#The lakbima cartoon is a matter of artistic expression and therefore of freedom of expression. #lakbimacartoon,” according to GroundViews.org, but the “unreserved apology” later published by the newspaper says in part that:

“Our cartoon was meant to be an artistic impression that was intended to lampoon, like cartoons are meant to, a certain political dynamic.  However this cartoon may have crossed the line or appeared to have done so in the eyes of certain quarters To those who were offended by this cartoon, we extend our apologies.”

Readers had complained about the cartoon in a form complaint to iMediaEthics as well as several other organizations including Reporters without Borders, the Center for International Media Ethics, the Society of Professional Journalists and the Center for Journalism Ethics.  The complaint letter, which was sent to iMediaEthics more than 18 times starting Sept. 10, reads in part:

“The cartoon violates all ethical principles of journalism and media expression not only in Sri Lanka but globally. There is an accepted form of visual journalism in commenting on current social, economic, cultural and political issues within and between countries. In this cartoon, however, the newspaper has allowed for gross sexism and crudity to override any form of civility in journalistic communication.”

Further, the letter labels the cartoon “extreme and totally unacceptable” as well as “derogatory to women and women politicians.”  Complainants also had called for an apology from the newspaper and for recipients of its complaint “in respect of media ethics and accountability, to act against this intolerable media behavior.”

According to Ceylon Today, Sri Lankan group the Women and Media Collective slammed the newspaper for publishing the cartoon, which it claimed meant ” the newspaper has allowed for gross sexism and crudity to override any form of civility in journalistic communication.”  In a Sept. 10 letter, the collective called for the newspaper to apologize. The wording of that letter, signed by the collective’s directors Dr. Sepali Kottegoda and Ms. Kumudini Samuel, is a shorter version of what iMediaEthics received.

We’ve written to Women and Media Collective and Lakbima News for more information and will update with any response.

See all our reports on Sri Lanka.