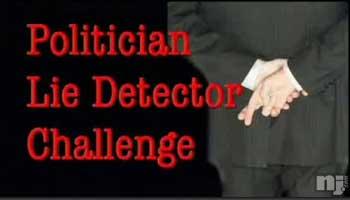 Believe it or not, this image is a screen capture from The Star Ledger "web news" broadcast. The Star grandstands and offers to settle the score between two dueling NJ pols by providing lie-detector tests. Debbie Holtz, politickernj.com, asked media ethicists if this challenge is serious news or a publicity stunt?

The Star Ledger offered to give two politicians lie-detector tests, called “The Lie Detector Challenge.” No, this is not an episode of the TV show, “The Moment of Truth” where contestants humiliate themselves while being asked rude questions– that may ruin their lives– in front of loved ones and a national audience. But it sure seems close and right out of the same entertainment playbook!

Holtz wrote, “The real issue in this round is whether the Ledgers lie detector challenge is a stunt designed to make some news or is it an appropriate role for the Fourth Estate?”

She asked SPJs Ethics Committee member, Mike Farrell, a former reporter who also teaches media ethics, “if he believed this ‘Lie Detector Challenge’ is an appropriate use for a newspaper’s online web content, Farrell had this to say: ‘Given the division over the reliability of polygraph tests, I would say no.’ ”

Stinky journalism agrees. Due to it’s lack of accuracy, any lie detector test result would be, at best, infotainment–not  truth.  I mean, pleeze. Does anyone believe –even editors at The Star–that either one of these men would ever participate in this stunt and actually take a lie-detector test with cameras rolling? Of course not. This is precisely why this so-called-challenge offer is more publicity stunt than anything real.