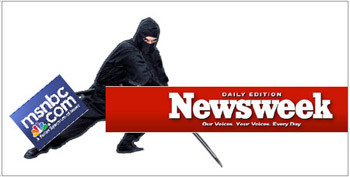 Last November, under the cover of media darkness, Newsweek migrated its website from the MSNBC homepage to its own web address, Newsweek.com.

These physical changes give us a glimpse into Newsweek’s messy editorial and business entanglements with its “strategic partners” NBC and Microsoft. They also show us that as big news companies strive to enhance profits through mergers, takeovers and discreet partnerships, they dilute the real value of their product and leave customers in the dark.

Newsweek.com’s changes follow a subtle redesign of Newsweek’s print version, which editor Jon Meacham described in October to the New York Post as a “stealth redesign.”

Stealth indeed. At first glance, the magazine’s new look is hardly distinguishable from the old. The changes amount to a modified table of contents and streamlined footers and headlines.

The modest alterations belie bigger, behind-the-scenes movement. In spite of the small cosmetic fixes, Bloomberg.com reported that “Newsweek.com would continue to share content with MSNBC.”

Since the announcement of their “strategic partnership” in 1999, NBC and the Washington Post Company have vowed to maintain “editorial independence.” Yet this stance seems to contradict another official statement from last September, when the Washington Post reported that Newsweek was divorcing its site from MSNBC in order “to increase control over advertising sales and editorial content.”

The physical changes to the magazine become very significant in light of this information.

The biggest change in the print version is, in fact, a subtraction. On page 6, the NBC and Microsoft logos once stamped prominently on the magazine’s masthead are now gone. Since last June, we have called attention to the troubling business relationships these logos represent. We believe they offer significant clues as to why, for instance, so much early coverage had been given by the magazine to NBC actor Fred Thompson’s non-existent campaign. (For all the hype and soaring poll numbers, Thompson’s candidacy was suspiciously moribund when primary season arrived.)

Click image to see animation.(Turn on sound) The biggest change in the print version is, in fact, a subtraction. On page 6, the NBC and Microsoft logos once stamped prominently on the magazine’s masthead are now gone

As the websites part ways, the physical and editorial relationships between the two companies seem to be getting cozier. In October, MSNBC Cable moved its operations from their Secaucus, New Jersey headquarters to 30 Rockefeller Plaza in Manhattan, right next door to NBC Studios.

In an interview with iMediaEthics, Newsweek.com editor, Deidre Depke, said that Newsweek had recently hired an editor stationed at MSNBC headquarters in Redmond, Washington. “He coordinates with their editors on daily news and on long-term projects to ensure that we can each leverage the relationship to the best of our abilities,” Depke wrote. “Editors in New York also participate in daily meetings via conference calls and section editors [at MSNBC] talk frequently.”

We asked Depke to comment on the impact of these business partnerships on editorial decision-making. “I can tell you unequivocally that the partnership never in any way affected any coverage—other than in some cases, where we disclosed the relationship in stories,” wrote Depke. “In fact, I was often pleasantly surprised by how much play a Newsweek story that was relatively tough on Microsoft, for instance, received from MSNBC.com. They are fiercely protective of their journalistic ethics, as, of course, are we. And whatever coverage Thompson got in Newsweek was in no way related to the Newsweek/MSNBC relationship.”

But what about publisher Greg Osberg’s statement to Bloomberg in September 2007 that the web site was being split in order “to increase control over advertising sales and editorial content”?

Depke carried out some swift and deft PR jujitsu on this line of questioning. She said by “editorial content,” Osberg “meant design and technology.”

So, by Depke’s estimation, “editorial content” is interchangeable with “design and technology.” Well done, grasshopper.

“We felt it was the right time for us to take full control of the site,” she continued. “Here is as an example of what I mean. It would have been very difficult for us to embed a video player on our homepage while we were part of MSNBC: neither the technology nor the template design supported it.”

But hadn’t the Bloomberg article implied an underlying editorial tension between MSNBC and Newsweek?

Like a Zen master versed in the arts of all things spin, Depke allayed all fears. “I can assure you that if there had been any editorial tension, we wouldn’t have retained the traffic partnership we currently have with msnbc.com. There were lots of other directions we could have gone. The same is true for MSNBC. We like MSNBC. We like its editors, we like the product. And, if I may speak for them, they like us and they like our stories.”

But Depke’s musings fail to address a critical point. The mutual benefits derived from this partnership (the “synergy” pursued so lustily in corporation land) are huge and worth preserving even if, God forbid, an editorial relationship were flawed beyond repair.

Forget the benefits of co-branding two major publications. The links between the websites increase the two corporations’ physical reach dramatically. Depke said that according to Nielsen web stats, Newsweek receives 7.5 million readers monthly. Half of these are estimated to come through outside links. The bulk of this outside traffic, not surprisingly, comes through MSN and MSNBC’s websites. The seamless, built-in connections between the MSNBC-Newsweek-Slate-Washington Post family of websites, however, gives Newsweek one-click access to a total reader pool of approximately 40 million readers. That’s big time and – from a business standpoint – worth protecting at all costs.

Throughout the course of our research, we have found clear and undisclosed conflicts-of-interest between the Washington Post Company and NBC. We have called for increased transparency of the business relationships between them. Whether or not the innermost editorial sanctum of the Washington Post Company has recognized the ethical implications of these partnerships is uncertain. (Multiple calls and emails yielded no response).

But the Federal Communications Commission (FCC) is making it easier for media giants to avoid such introspection.

Before last December, when the FCC eliminated the rule prohibiting one company from owning a newspaper and television station in the same market, the Washington Post Company may have had reason to fear government intervention. It just so happens that in the D.C. market, the Washington Post Company-NBC group controls both the Post newspaper and the NBC affiliate station WTVJ.

Because this key safeguard against media monopoly has been removed, it’s even more important that these partnerships be monitored. We plan to keep a close eye on the evolution of Newsweek’s new site and print magazine. We think this is especially important after Newsweek publisher Greg Osberg announced in October that the content sharing partnership would continue.

What these hidden alignments hold for the future of news is unclear. But Nation correspondent John Nichols, writing in a Seattle Times editorial, may offer a glimpse of what’s ahead. “The mogul’s dream is the citizen’s nightmare. With this rewrite of the rules, local, state and national democratic processes would be run through the wringer of media monopolies designed to reap massive profits — while comforting the comfortable and afflicting the afflicted in a manner that maintains the political and economic status quo.”

In the Elements of Journalism, Bill Kovach and Tom Rosentiel write that the possibility of enforcing the “firewall,” the mythical boundary between news and business, is an impossible task. Under current conditions, the best they could propose was to find executives and advertisers committed to “core journalistic values.” In other words, news companies need leaders who recognize that independence is critical to a news company’s bottom line.

But there is a self-defeating flaw in this system. When corporate media companies themselves start behaving as an appendage of the conglomerate – mating, merging, metastasizing in the name of maximizing “reach” and revenue – they undermine the very principle – independence – that gives their “product” any intrinsic value.