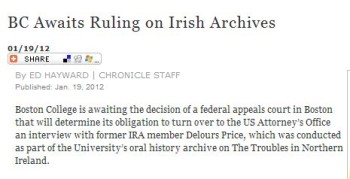 See a screenshot from a January report on the Boston College website about this anonymous source battle.

The Police Service of Northern Ireland wants U.S.-based Irish reporter Ed Moloney and his researcher Anthony McIntyre to identify his anonymous sources in his oral history “The Belfast Project” on the “conflict in Northern Ireland” while the PSNI looks into a 40-year-old murder, Committee to Protect Journalists reported.

According to the Committee to Protect Journalists, Moloney’s history project “was deposited at Boston College in an archive that would be sealed, according to the terms of the project, until the participants granted permission or died.” However, some parts of Moloney’s work have been published “in a book by Moloney and a subsequent high-profile documentary.”

The Committee to Protect Journalists noted that the U.S. has subpoenaed Boston College for the information.  According to Irish Central, the UK government wants “26 interviews given to [Boston College] by former IRA members….between 2001 and 2006.”

Specifically, the Police Service of Northern Ireland wants “transcripts of an interview given by former IRA member Dolours Price,” the Guardian reported.

According to the Guardian, Boston College claimed it can’t “protect the anonymity of Price, given that she in effect ‘outed’ herself in a newspaper interview.”

Boston College is appealing the judges’ rulings for it to provide the information, and Moloney and McIntyre are asking “to participate in the case so they can fully defend their interest” in protecting their sources and their interviews, not only for their journalistic rights but also for their safety from retaliation.

The Committee to Protect Journalists noted that internationally, “war correspondents enjoy some immunity against compelled testimony” because of a 2002 U.N. Tribunal case.

We have written to the Blanket, a journal McIntyre co-founded, seeking comment from McIntyre and will update with any response.

In 2010, we highlighted the media ethics case study of Nick Martin-Clark, a journalist who interviewed Clifford George McKeown in a Northern Ireland prison in 1999 with the promise of confidentiality.  Martin-Clark reported on McKeown’s confession to a killing, told police, and “gave evidence” in court, as we wrote.

For his and Moloney’s part, the two are “legally resisting the subpoenas.”  He wrote that “Boston College folded and are now appealing the size of the electric chair rather than its application.” Further, McIntyre said that “Because I am not permitted to enter the US due to IRA court convictions my wife has travelled there on three separate occasions this year to lobby politicians and profile the case in the media. We have also met with Irish politicians, put together a dedicated website, written in the press, did media interviews, sought to persuade academics to take an interest in the issues.’

McIntyre explained that the two are trying to gain publicity for the cause and get “political support” as well as trying to “establish legal standing.”  The pair are waiting to hear from the First Circuit court if they can “intervene” in the case, but a federal court “refused our application to intervene on the ground that we had no standing,” McIntyre wrote.  See here an Irish Times report from January about Judge William Young’s decision against letting them “challenge the release” of the tapes.

We have written to Boston College seeking comment and will update with any response.