Sun apology: We didn't mean to 'slur' Ross Barkley by comparing him to a gorilla - iMediaEthics

Sun apology: We didn’t mean to ‘slur’ Ross Barkley by comparing him to a gorilla 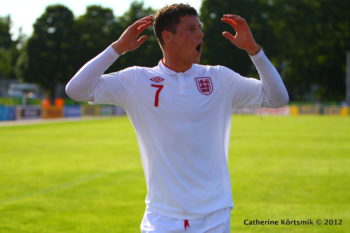 The UK Sun apologized to professional soccer player Ross Barkley, who is of African descent, after comparing him to a gorilla.

The apology, published April 22 online and on page 5 in print, claims the Sun didn’t mean to “slur” Barkley, a midfielder for Everton.

“At the time of publication, the paper was unaware of Ross Barkley’s heritage and there was never any slur intended,” the apology states.

“As soon as his background was drawn to our attention, the article was removed from online,” the apology continues.

The Sun apologized for the comparison and noted that Barkley’s lawyers “made a formal complaint about the piece.”

Barkley’s lawyer Matt Himsworth sent iMediaEthics the apology. iMediaEthics has asked him if Barkley is satisfied with the apology and if there will be any legal action.

The Sun‘s Kelvin MacKenzie’s column comparing Barkley to a gorilla included a side-by-side photo of Barkley next to a gorilla.

The Sun quickly suspended MacKenzie after outrage was expressed over the column, which included Liverpool’s mayor Joe Anderson filing a hate crime complaint to the police and Barkley’s soccer team banning the Sun, iMediaEthics reported.

Barkley also filed a complaint to the press regulator.

iMediaEthics has asked the Sun if any other staffers, besides MacKenzie, were disciplined over the column.

More than 200 complaints were filed with press regulator IPSO over the column, an IPSO spokesperson told iMediaEthics by e-mail.

Sun apology: We didn’t mean to ‘slur’ Ross Barkley by comparing him to a gorilla