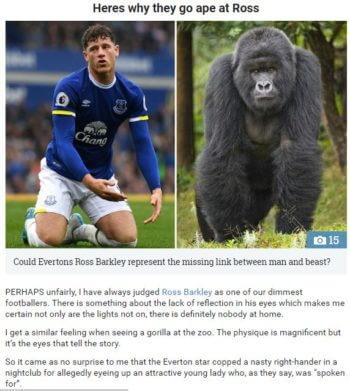 “I get a similar feeling when seeing a gorilla at the zoo,” MacKenzie wrote of Everton Football Club soccer player Ross Barkley. “The physique is magnificent but it’s the eyes that tell the story,” MacKenzie wrote.

With the column, the Sun included a side-by-side photo of Barkley with a gorilla, asking “Could Everton’s Ross Barkley represent the missing link between man and beast?”

Now, MacKenzie has been suspended by the Sun amidst racism accusations, his column has been unpublished, and the police are investigating the column for a potential racial hate crime, the Independent reported.

Barkley’s lawyer, Matt Himsworth, told iMediaEthics by e-mail, “We’re not making any comment at this stage.”

iMediaEthics asked IPSO about the complaints it has received, but a spokesperson explained that because it’s a holiday weekend, IPSO “won’t know how many until we process them” Tuesday, April 18.

In a statement published on Twitter by the Press Association, News UK stated it suspended MacKenzie immediately and would investigate the complaints after MacKenzie gets back from vacation.

News UK, the UK branch of News Corp., which publishes the Sun, said the comments “were wrong, unfunny and are not the view of the paper” and apologized. Further, News UK stated the Sun “was unaware of Ross Barkley’s heritage and there was never any slur intended.”

iMediaEthics has written to News UK to ask how long the suspension will last, how long the column was published, and who else is being held accountable since others had to be involved. The image selections and layout that compares a gorilla to the footballer surly wasn’t done by the suspended columnist alone.

MacKenzie featured Barkley because he has been in the news because he was punched in a Liverpool bar earlier this month. The column stated that Barkley is “too rich and too famous to be spending his time in local hangouts where most of the customers” are making about $10 per hour.

Further, MacKenzie insulted Liverpool residents by saying that the only other people in Liverpool who make as much as Barkley, a professional soccer player, are drug dealers.

MacKenzie added he thinks Barkley is “one of our dimmest footballers” and that his eyes suggest to him “not only are the lights not on, there is definitely nobody at home.”

The Everton Football Club pointed iMediaEthics to its statement saying it was banning the Sun from its grounds.

“Yesterday Everton Football Club informed The Sun newspaper it was banned from Goodison Park, the USM Finch Farm training ground and all areas of the Club’s operation. Whilst we will not dignify any journalist with a response to appalling and indefensible allegations, the newspaper has to know that any attack on this City, either against a much respected community or individual, is not acceptable.”

Below, see screenshots of the text in question that iMediaEthics obtained from the internet archive Wayback Machine. MacKenzie’s full column addressed several topics, including judges, car insurance and of course, Barkley. Only the section about Barkley appears to have been unpublished. 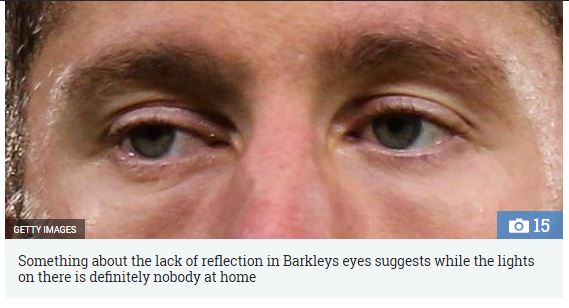 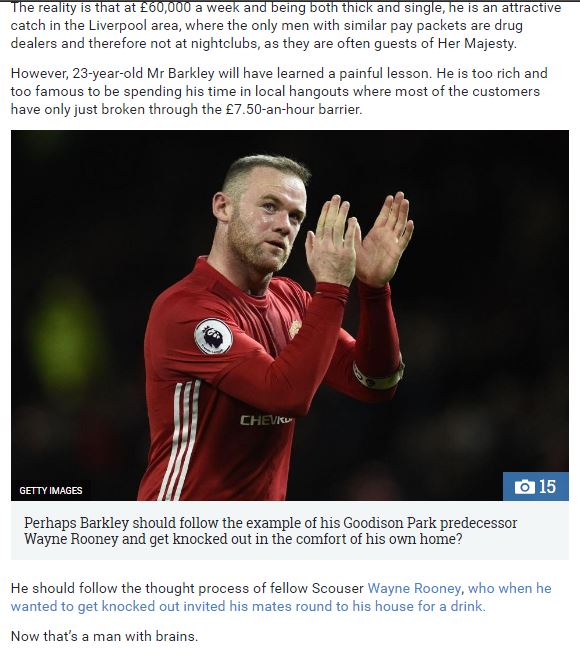 A screenshot of the original column about Barkley. (Credit: WaybackMachine/Archive.org)

MacKenzie denied his column was racist and said claims that it was were “beyond parody,” the BBC reported.

The mayor of Liverpool, Joe Anderson, complained to the local police, Merseyside Police, about the column, he tweeted. Anderson told iMediaEthics by e-mail, “I reported the comments made by Kelvin McKenzie because the were offensive to the people of my City and because they were racist. Ross Barkley has a Nigerian Grandfather and to compare him to an Ape is a racial slur. ”

iMediaEthics has written to the police to ask for more information. The Merseyside Police confirmed receiving a complaint about the comments amounting to a “racial hate crime,” the Independent reported.

UK newspapers noted that the timing of the column was bad. MacKenzies’s Sun column on Barkley was published the day before the anniversary of the Hillsborough tragedy, where nearly 100 people were killed after being crushed in a crowd after a 1989 football game.

MacKenzie was the editor of the Sun then, and the tabloid’s coverage blamed Liverpool fans for the disaster.

In 2012, the Sun apologized, 23 years later, for its coverage of the Hillsborough disaster, with its then-editor Dominic Mohan acknowledging its reporting was “inaccurate and offensive,” as iMediaEthics reported at the time.

“The Hillsborough Independent Panel has now established what really happened that day,” Mohan said. “It’s an appalling story and at the heart are the police’s attempts to smear Liverpool fans. It’s a version of events that 23 years ago the Sun went along with and for that we’re deeply ashamed and profoundly sorry.”

MacKenzie apologized at the time saying he was “totally misled” by authorities.

Other controversies involving MacKenzie include his angering readers last year when he criticized UK Channel 4 for having a Muslim hijab-wearing reporter, Fatima Manji, report the news of the truck attack in Nice, France, as iMediaEthics previously reported.

“Was it appropriate for her to be on camera when there had been yet another shocking slaughter by a Muslim?” he asked. “Was it done to stick one in the eye of the ordinary viewer who looks at the hijab as a sign of the slavery of Muslim women by a male-dominated and clearly violent religion?”

More than 1,400 complaints were filed with the press regulator IPSO over MacKenzie’s column, but IPSO ended up rejecting the complaints.

UPDATED:  10:10 AM With response from Anderson and Everton FC. 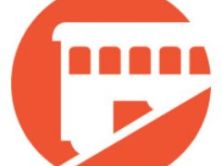