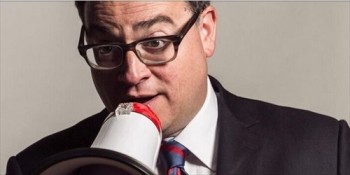 Canadian broadcast journalist Ezra Levant must pay $80,000 to a lawyer after being found to have libeled him, the Toronto Star reported.

Levant, a host for Sun News Network, claimed the lawyer, Khurrum Awan was a “liar, anti-Semitic and a jihadist,” according to the Star. His claims were in personal blogposts he published between 2008 and 2010, according to the ruling. A Sun News spokesperson confirmed it was not involved in the lawsuit

Awan’s lawyer said to iMediaEthics that Awan is “delighted” with the outcome.

Levant must also unpublish the blogposts found to have libeled Awan. ” In the posts, Levant wrote about Awan’s testimony at a British Columbia Human Rights Tribunal case about a complaint over an article in Maclean’s magazine from 2006, titled “The future belongs to Islam.” The piece was excerpted from Mark Steyn’s book ‘America Alone,'” The Huffington Post reported.

Levant had defended his post as “fair comment,” but the judge pointed out Levant “did little or no fact-checking” for the blogposts in question. Awan’s lawyer told iMediaEthics that Awan first sought corrections but when Levant refused, he took the matter to court.

“I find the defendant’s dominant motive in these blogposts was ill-will and that his repeated failure to take even basic steps to check his facts showed a reckless disregard for the truth,” the judge, Wendy Matheson wrote, according to the Star.

Matheson added, according to CTV News:

“The defendant makes a general assertion that none of the words complained of were defamatory due to the defendant’s reputation,” she wrote. “There is, however, ample evidence before me demonstrating express malice on the part of the defendant.”

Levant claimed the verdict amounted to a “national gag order,” the Star reported.

Levant plans to appeal the lawsuit and said the case was “a shocking case of libel chill that should concern anyone who is worried about radical Islam, the right to criticize it, and the right to call out anti-Semitism in the public square,” on his personal website.

Sun News Network apologized earlier this year after Levant mocked Canadian Liberal Party leader Justin Trudeau and his parents. Levant said Trudeau’s father was a “slut” and that his parents were “promiscuous,” as iMediaEthics previously reported.

The ruling is below, via Canada.com.

The Huffington Post noted that Levant previously lost a libel lawsuit in 2010 over his claims that a lawyer lied to a tribunal. Billionaire George Soros also threatened to sue over one of his columns but Sun News apologized.