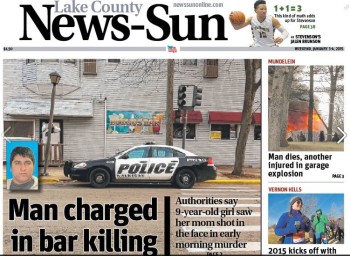 The News-Sun‘s June 9 and June 10, 2014 coverage included a photograph of Brown, “identifying him as Jamal Johnson, the suspected shooter of a Waukegan man, the suit said,” according to the Tribune. Johnson and two others was charged with first-degree murder over the 2013 death of Mutassem Ahmad Abdelaziz, the Tribune reported. Johnson was found guilty

The newspaper did publish a June 11 correction but Brown wasn’t satisfied. The correction read, the Tribune reported:

“In a story published June 10, the wrong photo was published for Jamal Johnson, who was charged with murder in the death of Mutassem Ahmad Abdelaziz of Waukegan in May 2013. The News-Sun regrets this error.”

iMediaEthics searched Google for the correction but did not find it.

Brown’s lawsuit explains why he wasn’t satisfied with the correction:

“The bungled attempt to offer a correction to the original story on June 11, 2014, further compounded the false identification of the Plaintiff in that it did little to disabuse the impression that (Brown) was an accused murderer and therefore reinforced the damage done by the original publication at a time when Defendants were already on notice that the initial publication was false.”

iMediaEthics has written to the Sun-Times and Lake County News-Sun for comment.

A commenter on the Tribune’s article about the lawsuit argued the lawsuit was the result of newspaper layoffs, writing, “This is what happens when you get rid of the editing managers, real journalists, fact checkers, assistants.”