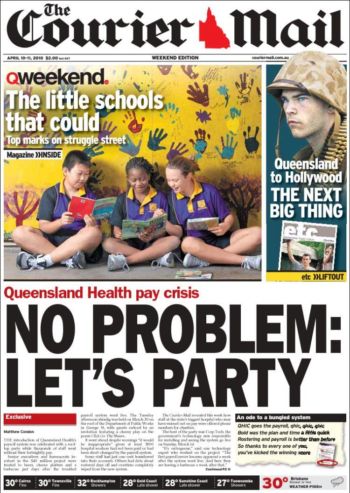 We’ve heard more than enough about “fake news,” but “fake refugees” was a new one on us.

Exhibit A is the Courier-Mail in Australia which claimed that “foreign-born criminals” are “fake refugees.”

The News Corp.-owned newspaper’s May 27, 2017 story, “FAKE REFUGEE OUTRAGE: Rapists, a hitman, and ice dealers allowed to stay,” and an accompanying opinion article, claimed there is a “Fake refugee controversy” and criminals have been allowed to stay in Australia even though they “should have been booted out of the country.” The story claimed there were “20 fake asylum seekers” who had “lied on their visa applications” to attempt to get refugee status.

A reader complained to the Australian Press Council about the article, questioning if it was fair to call “foreign-born criminals” “fake refugees.”

In its defense, the Courier-Mail argued it was OK to use the term because “‘fake refugee’ was not used in the legal sense of ‘refugee’ but rather in the sense that the tribunal has allowed people, whom the columnist believes ought be deported, to enjoy the shelter that Australia provides them,” the council reported. Further, the newspaper pointed to the recent news context that would have made it clear for readers. The Courier Mail claimed, the press council summarized, that “the term was used in the context of the preceding week’s news in which many references were made by the Minister to refer to a group of people not granted refugee status in Australia.”

Ultimately, the press council ruled in favor of the Courier-Mail, finding that the news article had sufficient context, and the opinion article was fair and “not based on significantly inaccurate factual material.” iMediaEthics has written to the Courier-Mail to ask about its use of “fake refugee.”

However, the press council did warn for careful reporting and use of the term “fake refugee.”

“The Council notes that there appears to be only one specific instance in the article of the term ‘fake refugee’ being applied to a person who made a false claim about the risks from deportation to his country of origin,” the press council ruled. “The rest of the examples mentioned being people from countries ineligible for refugee status. To avoid diminishing the integrity of the national debate concerning asylum seekers and refugees, care ought be taken to avoid applying the label “fake refugee” to individuals who have never sought or gained asylum, and to ensure that where such a term is used in the public sphere, it is accurately attributed to its source.”