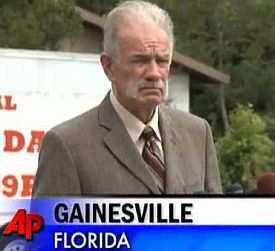 Terry Jones, pictured above in an Associated Press video posted on YouTube, is the Florida pastor who has been the center of a media controversy over his intentions to burn the Quran on Sept. 11. He most recently said he has suspended, but not canceled his plans to burn the Quran. (Credit: YouTube, AP)

As of now, Gainesville, Florida pastor Terry Jones has well-publicized his intentions to burn copies of the Quran on Sept. 11. But after media outlets including Fox News and the Associated Press, indicated they would be giving minimal if any coverage to the intended event, Jones retracted his firm commitment to not burn the holy books.

Jone’s “suspension” of the event came not after countless pleas by government officials, but after claiming that the imam behind Park 51 told him he would move the intended Muslim community center near the site of the World Trade Center.  However, Imam Feisal Abdul-Rauf, project developer for Park 51, has denied making any such commitment to Jones to move Park 51.

And now, Jone is saying it may or may not be back on, depending on what news media outlet you read.

What was the media’s role in hyping this controversy, which has played out on an international scale?

As the New York Times’s Brian Stelter reported, Jones’ threats are not the first time the Quran has been burned since Sept. 11, 2001.  The Westboro Baptist Church in Topeka, Kan., which has threatened to carry through with Jones’ plan if Jones indeed doesn’t burn a Quran, in fact, burned a Quran in 2008 but the media throng ignored it.

Bottom line: Has Jones been given way too much media coverage?  President Barack Obama’s press secretary Robert Gibbs did pinpoint that there have been “more people at [Jones’] press conferences than listen to his sermons,” because Jones’ congregation totals around 50 people.

After all, a Google News search of “Quran burning canceled” produces more than 11,000 news articles in less than 24 hours.  (Note, Jones says the burning is “suspended,” not canceled.)

Natasha Twal Tynes, a Jordanian-American journalist based in New York, wrote on her personal blog that the media is at fault for publicizing the story so much.

“This story could have been briefly covered as an isolated incident happening in a small Florida town. Instead, the media grabbed it and ran. They extensively covered it, analyzed it, and brought talking heads to debate it. Yes, they have the right to publish and air whatever they wish – and expand or diminish any event – but, again, should they?”

As a result, “a story that could have been easily forgotten” is the hot topic of conversation and front page headlines. And, she cautioned that the incident could be labeled “as another example of ‘Muslim-hating Americans'” which could be used to recruit extremists.

(As the Associated Press reported Sept. 10, Afghans have protested the Quran burning, and “several hundred demonstrators ran toward a NATO compound” in Badakhstan province, resulting in at least 11 people being injured.)

Newsweek’s Ravi Somaiya also acknowledged that this story became so well-known and such a controversy with the help of the media.

“Reporters and editors (myself included) lay the groundwork for him by tacitly promoting the current wave of Islamophobia seething across America,” Somaiya wrote.  The media coverage has in fact “helped promote Terry Jones and his Christian fundamentalists as exemplars of faith in America.”

“There almost certainly will be more reporters and cameramen at the Quran-burning than Quran burners,” Somaiya wrote.

Ethicist Kelly McBride of the Poynter Institute blogged Sept 9 advising “how to report on Quran Burning and other hate speech.”  Noting that journalists are supposed to minimize harm (note:  an entire section of the Society of Professional Journalists’ code of ethics is devoted to the topic of minimizing harm), she wrote that “covering Jones’ small event on Saturday has the potential to cause great harm.”

Devoting media coverage to the event could lead to radical violence. “How you choose to cover Saturday’s stunt says something about your values,” McBride opined.

While ignoring Jones is an option, McBride wrote that journalists may have an obligation to report it as a news event.

“Many in Gainesville, Fla., and beyond argue that pointing a camera at Jones is like giving a toddler attention in the middle of a tantrum. Ignore him and he’ll go away. They have a point. Yet part of our job as journalists is to document events. When we ignore acts of hate, no one has the opportunity to react, to condemn them or to proclaim a different belief system.”

McBride advised journalists to minimize harm and offered tips for those who might cover the burning.  See some of her tips below, or read her whole post here:

Despite the widespread media coverage of Jones’ intentions to burn a Quran Sept. 11, media outlets started announcing what policies they would follow in reporting the burning.

The Associated Press’s Tom Kent issued a memo to AP staff addressing how the wire service would report the burning and also, not publish photos of the Quran in flames.  Kent is the deputy managing editor for standards and production at the AP.

“We plan ONE main spot story on this issue a day,” Kent wrote, asking for staff to not be repetitive in its coverage by reporting “stories, photos, audio and video that repeatedly make the same point.”  Kent added that the AP wouldn’t be publishing “images or audio that specifically show Qurans being burned, and will not provide detailed text descriptions of the burning.”

Kent urged that the AP’s reporters “keep our coverage in proportion” and to provide context in reporting because even though the event has been highly reported and speculated on, “at the moment it’s a proposal by a tiny group that may or may not even happen.”

“If we tried to cover everyone who wants us to stick a camera in front of them, we’d run out of cameras pretty fast each day. But this is really about just using some judgment,” Clemente is quoted as saying.  He furthered, adding that “there are many more important things going on in the world than” Jones, a pastor with a congregation of 50, publicizing an event.

The New York Times’s Media Decoder blog reported Sept. 9 that the three major TV networks ABC, CBS and NBC all reported they intend to cover the story in context.

The New York Times’s executive editor Bill Keller is reported to have said in an e-mail that the newspaper doesn’t have a policy against publishing offensive material, “but we try to refrain from giving widespread offense unless there is some offsetting journalistic purpose.”

Further, “A picture of a burning book contributes nothing substantial to a story about book-burning, so the offense seems entirely gratuitous … The freedom to publish includes the freedom not to publish.”

iMediaEthics has contacted Douglas Underwood, a professor of media ethics and media and religion at the University of Washington’s communications department, for comment and will update with any response.

UPDATE 09/11/2010 10:34 AM:  Jones promised on NBC’s “Today Show” this morning that his church won’t ever burn the Quran. “We will definitely not burn the Quran, no…Not today, not ever,” MSNBC quoted Jones as saying.

Jones further stated that he wouldn’t burn the holy book “even if the Islamic center is built near ground zero.”

Jones added that his church intended on burning the Quran “to expose that there is an element of Islam that is very dangerous and very radical” and that he thinks “we have definitely accomplished that mission.”  See MSNBC’s report here.