The Ascent of Truth: How to get a correction from WNBC 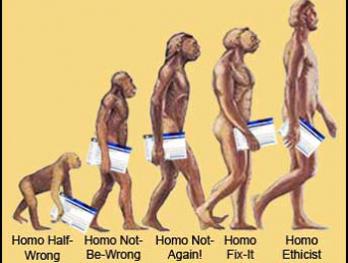 Try getting the mainstream media to own up to their mistakes.  When I recently tried getting a correction on a story posted on WNBC, I found out that it’s not as simple as writing an email or making a phone call.  It involved lengthy conversations with a press rep, diplomatic email correspondences, and back room machinations, resulting in a series of partial corrections.  To illustrate the “Ascent of Truth,” I used a modified version of Darwin’s chart.  Nobody said that evolution would be simple or straightforward.

To be fair, it’s hard to describe Critical Mass, a monthly bike ride that has been variously described as a “celebration,” “gathering,” and “protest” occurring in cities around the world.

Still, I was surprised by one staggeringly inaccurate account, a web report of a News Channel 4 broadcast of the March 2007 ride that got it nearly half-wrong.  In a 118-word article, an impressive 49 words communicated misleading or inaccurate information.  (See “Homo Half-Wrong.”)  After I called the errors to the publication’s attention, WNBC set upon a series of four improvements, and the article gradually evolved to something approaching an accurate news story.

(Full disclosure: I participated in the ride with the intention of writing a first-hand report of it. It is this inside perspective that first allowed me to see that both of these influential reports were deeply flawed.)

People expected to hear the regular clink of handcuffs…

The March ride was particularly notable because it was the first since the NYPD — over the objections of city legislators and defenders of the First Amendment — changed the parade rule to outlaw rides and demonstrations of 50 or more people without a permit.  The Los Angeles Times stoked the flames by predicting mass arrests on the scale of the 2004 Republican National Convention; and I even notified my brother so that he wouldn’t be surprised if I was calling him from a jail cell.  Violation of the new rule was punishable with a maximum 10-day sentence.  The event attracted widespread television, radio, print, and online media. All of them, it seems, expected to hear the regular clinks of handcuffs.  Luckily for the cyclists, this never happened because the police never enforced the rule. Most of the media dutifully reported this.

But you wouldn’t know that from WNBC.com’s original report.  Published without a byline, the story’s title (“NYPD Arrests Cyclists Riding En Masse Without Permit”) falsely implies that cyclists were arrested for violating the parade rule.  Not so, according to Detective Kevin Czartoryski from the Deputy Commissioner of Public Information, who was there that night.

In its second and third errors, I discovered that the WNBC article inflates the number of arrests as “five riders” and later as “at least five.”  Court documents obtained from the District Attorney’s office prove that three people were arrested on unrelated charges.

Who, exactly, then, was interviewed?

At one point, the article quotes unnamed “organizers” of the ride, even though Critical Mass, strange as it may sound, is not an organization and, as such, has no leaders.   Who, exactly, then, was interviewed?  The final error occurred in the last paragraph, which asserted that the “police said they enforced the new regulations.”  This troubling claim also involved an anonymous NYPD source.

When I contacted WNBC, the web editor passed me off to Alison Rudnick, a spokesperson for the website, who asked me to submit my questions by email.  Although she was always prompt, courteous, and professional in our two-week-long correspondence, it eventually become apparent that the powers-that-be would make her jump through hoops in order to avoid accountability.

On April 11, a day after I sent my query, I was informed by email that the story “was written and produced by a weekend Web editor who is no longer a WNBC.com employee.”  Nothing more.

The subtext of the email seemed to be, “Well, that cares care of that.”  Problem was, the story was still on the website without corrections a week later.

So I sent a follow-up email.  This time, I received a phone call telling me the corrections had been made.  When I looked at the new page, I saw it had been “updated.”  Update?   What about the corrections?  I had to compare the new article with a screenshot that I thankfully saved in order to find the changes.  After going line by line, I identified two.

The phrase “Police arrested five cyclists” had been changed to “Police brought five cyclists into custody“ [italics mine].  Then, I looked down, and suddenly, “Organizers” transformed into “Some riders.”  (See the “Homo Not-Be-Wrong” screenshot for the first round of improvements.)

I asked Rudnick whether WNBC had a policy to make their corrections transparent.  She told me that the protocol is changing the update bar and the text without notifying readers of the original error, which does not distinguish between additional information and corrections precipitated by errors.

I pointed out that the article still claimed that the police enforced the parade rule. So, in their next edit, they merely took out the offending line.  Poof!  A new update bar emerged dated two hours later, and the offending phrase (“But police said they enforced the new regulations”) vanished.  (See the “ Homo Not-Again!” chart for the next correction.)

After the third update, there was no explicit claim that the NYPD arrested people for violating the parade rule, but the implication was unmistakable.  Starting with the still unchanged title, every word in the article would lead an honest reader to conclude that the parade rule was enforced.  What’s more, there was a new error in the correction!  It said that two riders were arrested, now making the figure one lower than the actual number.

This time, I sent my reply along with the District Attorney’s proof that three people were arrested on charges – including assault, criminal possession of a weapon, and disorderly conduct – completely unrelated to the parade rule.  While WNBC had cordially thanked me in the past for pointing out their errors, the new response to my inquiries became hand-wringing and excuse making.  They needed time to check their sources against the DA’s definitive testimony.  Besides, I was asked, didn’t “Critical Mass” have a “responsibility” to provide correct information to the press?  Taking a breath, I explained again that Critical Mass is not an organization and has no representatives.

Seeing that this line of defense was getting us nowhere, WNBC said that they would give the writers and editors time to “dot every ‘i’ and cross every ‘t’” before issuing the next correction.  But the problem wasn’t only the grab bag of factual errors.  The basic premise of the story was wrong.  No amount of jury-rigging of the original text could change that.  What was needed was a re-write.  I was assured that another “update” would come the next day, and I hoped that the website would try to correct the story this time rather than slap it with a couple semantic band-aids.

After holding publication of my article another day, I contacted WNBC and found out that the editors had called the DA’s office to “verify” the information found in the DA’s documents I had sent them.  Hours later, the powers that be whittled down the text to a mere 51-words, without any changes of substance.  The parade rule disappeared from the story, but the implications that “two” riders were arrested for “protesting” did not.  The public is still left with the baseless fear that our rights of public assembly and protest are under attack.  (See “ Homo Fix-It [A].”)
We’re out of monkeys!

Here we go again with another email urging another round of corrections.  WNBC got back to me minutes later assuring that a full correction would come soon.  “At that point,” they emphasized, “we stand by the story.”  But the fourth update corrected only one of the errors; the other one, apparently, they stood by.

What was particularly maddening about WNBC sticking to the error (i.e. “two actually charged”) is that I provided the station with the contact information for verification of my sources at the DA and the NYPD. The spokesperson left me with the impression that she had contacted them, telling me the phone numbers I’d given her were “helpful.” I called both of my contacts and found out that they had not received calls from WNBC.  My police contact, Detective Czartoyski, sent a written confirmation that three were arrested and charged, which I passed on to the station.

** Updated, 6/28/07
“We are only human.”
This time came a true mea culpa. “You’ll be happy to know that the number now stands at three on the Web site,” said Rudnick, who explained that WNBC knew the actual number but  accidentally forgot to make the change through “an ironic twist of fate.” Fair enough. Mistakes happen, and she responded to the incident with good humor in the email.  “To play off your evolution chart,” she joked, “we are only human.”  (A final correction chart can be found here.)

WNBC has finally reached the missing link stage of “Homo Fix-It (C),” but there is one more crucial step before the website earns the title of “Homo Ethicist.” They must make their corrections transparent. Right now, only regular readers of this website would know the story was ever in error. In order to entice WNBC into changing their corrections policy to industry standards, Art Science Research Laboratory founder and sculptor Rhonda Roland Shearer will award WNBC our first-ever statue for ethical achievement. Spokesperson Alison Rudnick responded to the offer in an email, saying, “I want that certificate, damn it.” She says that she’s been calling for a policy meeting to make it happen, but has not been able to effect that change in over a month and a half since the award was offered. During our last conversation, she explained, “Something always gets in the way of us getting together, but I hope to do it after the holiday.”

In the meantime, who knows how many erroneous stories are being “updated”?

The Ascent of Truth: How to get a correction from WNBC