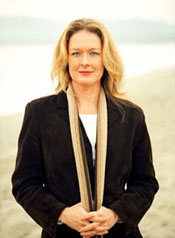 Amy Wallace, pictured here, has become the target of vitriolic, misogynistic attacks after writing a scientifically accurate and compelling feature on the anti-vaccine movement. (Credit: amy-wallace.com)

iMediaEthics has been working to critique and correct bad vaccine reporting this fall flu season. But this time, instead of sensationalism or pseudoscience, it’s actually an example of excellent journalism that has brought some new ethical questions to light.

Just as bad medical reporting can be dangerous for the public, great medical reporting, unfortunately, can sometimes be dangerous for the reporter. Such is evident in the attacks and threats made recently against freelance writer Amy Wallace, who penned an in-depth, scientifically accurate, and logically argued feature in WIRED magazine last month about vaccines, autism, and the modern anti-vaccine movement.

Wallace’s WIRED piece, “An Epidemic of Fear: How Panicked Parents Skipping Shots Endangers Us All”, uses a profile of pediatrician Paul Offit–inventor of the rotavirus vaccine, RotaTeq–to frame a discussion of the anti-vaccine movement and what their rhetoric and activism means for public health. The piece describes the science at stake faithfully: That no link between vaccines and autism has been found, and that the risk of vaccinating is far lower that the risk faced from the diseases vaccines are intended to prevent.

Though Offit, who wrote a book criticizing the anti-vaccine movement himself, is a predictable target for ire, the article is factual, well written, and free of false balance. And in the wake of it, Wallace has received veiled death threats, insults to her anatomy, and accusations both that she was intellectually “raped” by her source, and that she is in love with him.

Wallace began posting responses to her story in a Twitter feed after receiving numerous comments and letters. WIRED has compiled some of her tweets here, including a passage highlighting some of the worst:

J.B. Handley, the founder of Generation Rescue, the anti-vaccine group that actress Jenny McCarthy helps promote, sent an essay titled “Paul Offit Rapes (intellectually) Amy Wallace and Wired Magazine.” In it, he implied that Offit had slipped me a date rape drug. “The roofie cocktails at Paul Offit’s house must be damn good,” he wrote. Later, he sent a revised version that omitted rape and replaced it with the image of me drinking Offit’s Kool-aid. That one was later posted at the anti-vaccine blog Age of Autism. You can read that blog here

I’ve been told I’ll think differently “if you live to grow up.” I’ve been warned that “this article will haunt you for a long time.” Just now, I got an email so sexually explicit that I can’t paraphrase it here. Except to say it contained the c-word and a reference to dead fish.

Though the misogyny of such attacks isn’t anything new for female science writers and bloggers, the venom of it in Wallace’s case has been decried by a number of other science writers.

“Wallace’s article has been widely heralded by the scientific community but has invoked the wrath of several anti-vaccination groups and individual followers,” The pseudonymous Abel Pharmboy writes on his blog Terra Sigillata.

Amy Wallace is a seasoned journalist with over 25 years of experience writing professionally for such publications as The Los Angeles Times, The New York Times, and Condé Nast. She has covered the highly-contentious and often backstabbing culture of the entertainment industry, topics as polarizing as the death penalty, and charged profiles such as that of an emotionally-terrorized woman who murdered her husband. Yet, she notes that she has never before “experienced such an avalanche of letters and emails.”

Well, Ms. Wallace, you have committed the sin of 1) being a female professional and 2) questioning a vocal and vitriolic pseudoscience demographic.

And like every other woman science blogger I know, without exception, you are now the target of the type of electronic criticism of the lowest common denominator.

Orac (the preferred pseudonym of the man behind scienceblog Respectful Insolence), writes,

It’s the M.O. of the anti-vaccine movement. Unable to win on science, they try to win through intimidation and smears. As a result, scientists are reluctant to go into autism research, because they quite understandably don’t want the hassle of dealing with the attacks….  Indeed, the reaction of the anti-vaccine movement to Wallace’s piece makes me wonder if part of the reason for so much of the false balance and the apparent reluctance of journalists to call out Jenny McCarthy and put her on the spot in an interview has anything to do with the fear. It’s a possibility.

As important as it is to regularly note the places where the press gets science wrong, it seems equally important for iMediaEthics to note what journalists face when they make the effort and take the risk in getting it right.

Wallace, clearly, was brave enough to risk and then weather these kinds of attacks. But it is unfortunate that her experience may dissuade other enterprising journalists from writing responsible accurate science and health stories. It is unfortunate that children may go without a vaccine, their health and lives put at risk, as well as the health and lives of the vaccinated children who share classrooms and hugs with them.

Less an issue of journalistic ethics, the behavior of the individuals who have responded to Wallace’s piece in this way is really a failure of ethics in general and the lack of accountability for anonymous threats made via email. Hopefully it will not impinge future journalism that serves the public interest, and public health.

And check out her evolving Twitter commentary on responses to the vaccine piece.