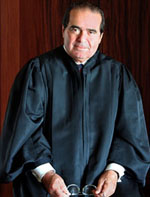 On October 27, a story posted at the Huffington Post announced the news “Scalia on Brown v. Board of Education: I Would Have Dissented.”

The post described how in a University of Arizona talk, Supreme Court Justice Antonin Scalia had apparently said that if he had been on the high court in 1954, he would have disagreed with the historic decision ending school segregation. It turns out, Scalia didn’t say that at all (more on this later).  Megan Garber, writing in the Columbia Journalism Review, talks about how this false story spread, and how well different media have accepted responsibility and corrected their mistake.

“What’s notable about the Scalia narrative… is not merely the egregiousness of the words put in the mouth of the Justice,” Garber writes. “More interesting is the context in which the error grew—and the manner in which the erroneous story went viral.”  Both the paper which first published the mistake, Arizona’s East Valley Tribune, and the blogs that aggregated the story are responsible for the error.  But Garber points out that bloggers in this case went much further than the Tribune toward transparently correcting their error.  She discusses how this highlights that the task of creating and maintaining trust is held differently by web writers than the mainstream media.

The problem started with a story in the Tribune described by Garber as “riddled with red flags on the accuracy front.”  The paper reported that:

Scalia said he likely would have dissented from the historic 1954 Brown v. Board of Education decision that declared school segregation illegal and struck down the system of “separate but equal” public schools. He said that decision, which overturned earlier precedent, was designed to provide an approach the majority liked better.

Basically, the Tribune had misquoted Scalia making an outlandish statement in support of segregation, when in fact he had made a complicated statement against segregation.  “Nothing to see here, folks. Scalia was not, in fact, advocating segregation yesterday. No incendiary affronts to common decency were afoot. (Unless, that is, one counts sloppy reporting,)” Garber writes.

All of this raises the question, how do mistakes like this come to be, and how do they spread so far so quickly?  Garber argues that the paper and the bloggers each hold some blame here.  First off, she calls it “worrisome” that no one who aggregated the story managed to catch the red flags. At the very least, the story should have seemed unlikely enough to look into.

“Even in a media landscape populated by Balloon Boys and Real-Life Pirates and Porcine Viruses and Sarah Palin…some things are still, yes, simply too bizarre to be true,” Garber writes. “And ‘Sitting Supreme Court Justice Offhandedly Advocating Segregation’ is, indeed, one of those things.”

Everyone gets a story wrong sometimes, there’s no avoiding that. But in this instance, the bloggers who picked up the article could and should have avoided the situation… Before posting, it’s just good practice to look for a primary source — video, audio or a transcript from the event — not to mention to check against Scalia’s previous statements and even call the court for comment. It may mean you have to wait a few minutes, even a few hours, before posting what others already have, but it’s better to be right than to be fast.

At the same time, Garber argues, in sourcing a newspaper, the blogs had a somewhat reasonable expectation that what they were aggregating had already been vetted. “They made a fair assumption that the information they were repeating for their readers was accurate,” she writes, quoting Yale law professor and prolific blogger Jack Balkin, who writes that “this was supposed to have been a fact-checked story by a reputable mainstream news organization… The original duty was that of the mainstream media organization that published the piece in the first place.”

Garber argues though, that responsibility to the truth doesn’t stop with a first published report–accuracy is a process. Thus, bloggers who pick up a false story are not without blame, especially in this situation where checking would have been as easy as watching the video of the event.

But Garber also says that accuracy must go beyond fact-checking. “[The duty of the media] applies not merely to the original reporting of a story—getting it right—but also to the correction of reporting that turns out to be erroneous: getting it right for the long term. Accuracy—and, therefore, trust—are not mere matters of checking one’s facts before one posts a piece. Precision must be an ongoing process—and media outlets, be they staffed by one person or 100, must own up to their mistakes in an obvious, record-correcting, and generally transparent way,” she writes.

Balkin posts a top-of-page update and apology.  HuffPo corrects at the top of their article and leaves the original false text available to contextualize the correction–honest evidence of their own mistake. Garber writes:

Meanwhile…the newspaper—the originator of the flawed reporting, and the only member, in this crowd, of that increasingly nebulous group known as the MSM—initially simply scrubbed the offending passage from its Scalia story, without a note of explanation. Then, late in the day yesterday, it replaced the initial story with a new one…

The Scalia story is yet another piece of evidence that the “freewheeling” blogosphere is, in its own way, professionalizing: it’s developing shared standards that are aimed, as similar standards were for the MSM, at cultivating trust. “CORRECTION:”—updating stories in real time, in a can’t-miss-it manner—is one of those standards. Mistakes, particularly as the speed of our news cycle shifts into ‘warp,’ will happen. The distinction—and the trust—comes in how outlets choose to fix them.