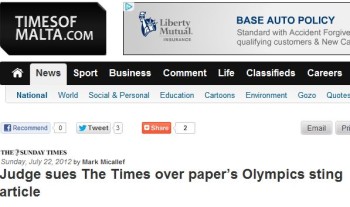 The Times of Malta noted that Sacco “refused to say whether he is also taking legal action against” the UK Times, the newspaper that originated the accusations.

The News Corp-owned Sunday Times of London had taped Sacco and the committee general secretary Joseph Cassar discussing the tickets sale. See the transcript of the undercover taped conversation.   Then, the Times of Malta published two articles, “No wrongdoing in Olympic ticket sting” and “Minister calls for probe on judge” about the Sunday Times’ report and “Sacco’s reaction,” the Times of Malta explained.

According to a separate Times of Malta report, Cassar defended his actions and denied that he was “involved in any illegal resale of tickets.”  Cassar said that the undercover reporters said they were “representatives of a major investor in the ticketing and hospitality trade.”  The Times of Malta noted that the lawsuit is a “criminal libel complaint.”

The Maltese Justice Minister called for the country’s president to “investigate” Sacco after the Times of London’s article, according to the Times of Malta. Sacco reiterated his denials of the accusations, and is quoted as saying “If perceptions are wrong, it is not my fault.”

We have written to the Malta Olympic Committee for comment and will update with any response. We are also writing to the Times of Malta.

We wrote recently about another libel case in Malta.  In July, Malta Today was fined €18,000 for libel over there articles about a lawyer.  The newspaper told iMediaEthics that it plans to appeal the case.

“Mr Justice Farrugia Sacco has instituted criminal libel proceedings against the editor and reporter of The Times. In view of the fact that the case is now sub judice, The Times would prefer not to make any comments.”