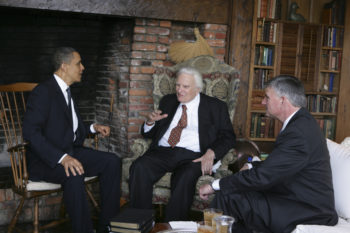 Every so often, iMediaEthics rounds up interesting or entertaining corrections from the news media. Below, check out some that have made our list in 2017 so far.

1. Billy Graham is not dead. The Chicago Tribune accidentally killed him off in an April 3 op-ed. It wasn’t the first time a news outlet thought the televangelist died. In 2011, Charlotte, North Carolina CBS-affiliate WBTV incorrectly reported Graham died, when he was only in the hospital.

The Chicago Tribune‘s correction reads: “An op-ed in Monday’s Perspective section described Billy Graham as ‘the late evangelist,’ implying that Graham is dead. He is alive.”

The New York Times‘ April 5 correction: “Because of an editing error, an earlier version of this article misidentified Ivanka Trump as President Trump’s wife. His wife is Melania. Ivanka is one of his daughters.”

3. The Associated Press didn’t advise journalists not to use the word homophobia in 1992. The New York Times erred in saying so in a March 22 obituary for George Weinberg, the man who coined the word “homophobia.”

The Times‘ correction reads: “An obituary on Friday about the psychotherapist George Weinberg, who coined the word ‘homophobia,’ misstated the year The Associated Press discouraged use of that word. It was 2012, not 1992.”

4. Sikh versus Muslim? The New York Times mixed up the two religions in a March 26 report, “Why do all the Jihadis come to Birmingham?”

“A picture on Monday with an article about Muslims in Birmingham, England, was published in error. It showed a Sikh man, not a Muslim.”

Below, check out our latest collection. Our 2016 Top 10 corrections list is here.