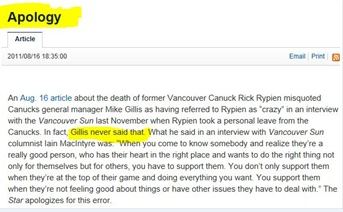 The Toronto Star apologized for attributing a fake quote to a member of the Canucks management. (credit: Toronto Star, screenshot)

The 27-year-old was “found dead” early last week, according to the Star.

The Star’s misquote featured Canucks general manager Mike Gillis calling Rypien “crazy” last year after Rypien took an “extended leave” for “personal reasons.”  The quote was attributed to the Vancouver Sun, but it really came from Wikipedia, according to English.

The Star’s story had been written by an intern, who “failed to properly verify its accuracy,” English explained.

“I’m not going to make excuses. It was an awful mistake, I did not do my due diligence.  Wikipedia is one of the places I often go for a primer on any subject but I had never quoted from it.”

He added that he is aware of the possibility of phony information being on Wikipedia and commented that he thought the quote was legitimate because the quote was listed as having been made to the Sun.

The original Aug. 16 story now features a note disclosing that the story has been “edited” and links to the apology. The Aug. 16 apology (see here) states that the Star article had “misquoted” Gillis with the “crazy” quote and added Gillis’ real quote from the Vancouver Sun interview. That real quote states:

“When you come to know somebody and realize they’re a really good person, who has their heart in the right place and wants to do the right thing not only for themselves but for others, you have to support them.

But, the Canucks aren’t so thrilled with the error or the apology.  Canucks communications vice president T.C. Carling called the error “terrible” and noted that Rypien death is “even more difficult” for the Canucks, according to English.

The Globe and Mail reported that the Canucks’ press statement following the original article denied the quote.

“A quote used in an article today in the Toronto Star sports section attributed to Mike Gillis is not accurate, not factual and does not reflect in anyway the feelings or level of commitment both Gillis and the organization had for Rick Rypien.

“Our organization is tremendously saddened by the passing of Rick and the newspaper’s choice of words in this article is unfair.”

The Globe and Mail noted that Gillis called this incident “the most irresponsible and inconsiderate” of his “media interactions.”  Gillis added that “it appears to have been done with a purpose.”

The Province reported that Canucks assistant general manager Laurence Gilman commented that Gillis and the Canucks are “considering [their] legal options.”

iMediaEthics has written to the Canucks’ Gillis for comment and will update with any response.

The headline incorrectly stated that Rypien’s first name is Ryan Rypien. The hockey player in question is Rick Rypien.