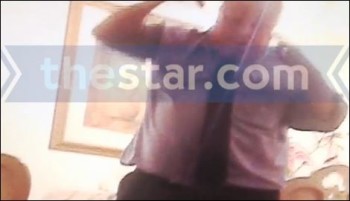 A screenshot from the video of Rob Ford. Ford has admitted to being "inebriated." (Credit: Toronto Star, screenshot)

The Toronto Star paid a source an undisclosed amount of money for a video of a Toronto mayor Rob Ford, drunkenly screaming about how he was going to kill someone. Ford didn’t say who he was talking about.  “I’m gonna kill that f–king guy,” Ford says.

This video is separate from the video that the Star, Gawker and Toronto police have all seen of Ford smoking crack.

The Toronto Star published the short video on its website, noting that “the full context is unclear” and that there was “graphic language” in the video. The Star also included a transcript of the video. The video shows Ford aggressively talking about someone while he is pacing, saying he was going to “poke his eyes out” and asking for 15 minutes to kill the person. “Don’t tell me, we’re liars, thieves, birds,” he says. The Toronto Star noted that Ford’s manner of speaking in this video is “similar to” a video that it saw earlier this year of the mayor smoking crack.  “Ford’s words switch rapidly from being easily heard to incomprehensible,” the Star wrote.

The person he is speaking with, who is unidentified and not shown, says that the 15 minutes Ford wants is “too much time.”

The Star revealed in its Nov. 7 report that it exchanged cash for the video but didn’t say how much. According to the Star:

“The Star purchased the video from a source who filmed it from someone else’s computer. The person with the computer was there in the room, the Star was told.”

Toronto Star reporter Kevin Donovan told Poynter that the Star isn’t “disclosing the amount” it paid for the video.  “It is not a lot and it is consistent with what media organizations pay for photo and video images,” he is quoted as saying. The Star’s editor Michael Cooke commented on the purchase to CP24: “No one’s getting rich off this video. We paid for it what we would normally pay for a video of that nature of newsworthy, overwhelming staggering public interest.” While Cooke estimated it cost “what you might pay for a good dinner,” the Globe and Mail’s anonymous sources said it cost $5,000.

Ford quickly apologized for the video, admitting he was “very, very inebriated,” and that the  video is “extremely embarrassing.”

Ford’s lawyer, Dennis Morris, indicated he didn’t know when the video was taken. In an interview with the Associated Press, he asked, “Was it taken eight, 10 months ago or a short time ago? I’m going to try to find that out too. Maybe the Toronto Star knows better.”

Earlier this year, the Toronto Star and Gawker reported that they were offered  the chance to buy a different video of Ford. That video showed Ford smoking crack. The Star said in its May 16 report that the video sellers asked for “six figures for the video.”  The newspaper stated at the time: “The Star did not pay money and did not obtain a copy of the video.”

Gawker, on the other hand, started a crowd-sourced fundraising campaign and raised over $200,000 to buy the video. When push came to shove, Gawker didn’t get the video because it lost contact with the video sellers.

In the past days, Toronto police said they obtained that video and confirmed that it did show the mayor smoking crack. Ford recently admitted, after months of denials, that he has smoked crack.

iMediaEthics has written to the Toronto Star‘s Kevin Donovan asking who at the Star made the decision to pay for the video published today. We’ve also asked why the Star paid for today’s video and not the video offered earlier this year of Ford smoking crack. We’ll update with any response.

UPDATE: 11/7/2013: 4:26 PM EST: The Star suggested the video was taken in August because the person speaking to Ford mentioned a by-election. The “need” for a byelection didn’t occur until August.

The Star added that it did pay $5,000 for the video in an updated version of its original story. The paper’s editor, Cooke, defended the payment because it wasn’t “paying a source for information” but instead “purchasing a video.”

The Star added: “The Star has been assured the money went to ‘the legal and beneficial use of a family.'”