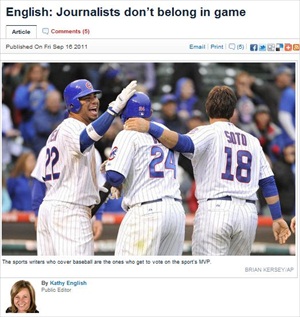 As English explained, sports writers who belong to the Baseball Writers’ Association of America vote to determine who is Major League Baseball’s Most Valuable Player and which players are named to the Hall of Fame.

However, English outlined a “debate” on whether it’s OK for sports journalists to make those decisions.

While some journalists — like Philadelphia Inquirer’s Phil Sheridan and Seattle Post-Intelligencer’s John Levesque — have previously stated that voting on the MVP award is “ethically indefensible” and “a conflict of interest,” respectively, obviously the Baseball Writers’ Association of America backs the selection process, English explained.  That reasoning is ” as professional observers of the game, they are best placed to determine its award winners and those players worthy of hall of fame enshrinement.”

The Los Angeles Times and Washington Post prohibit “writers from voting on any awards,” but the Toronto Star’s ethics guidebook doesn’t specifically comment on “voting on awards in sports or any other area,” English explained.

English noted that two Star sports staff — editor Jon Filson and columnist Cathal Kelly — told her that “the voting process is transparent” because voting selections are made public and that the voting doesn’t influence the sports writer’s work or interactions with players.

“Journalists are supposed to be independent observers, not participants. So why are sports writers playing ball here?” English wondered.

The Baseball Writers’ Association of America states on its website that the group was created in 1908 “to assist journalists covering Major League Baseball for daily newspapers.”  According to the website, the association has “more than 700 active members .. working for newspapers, magazines and major web sites.”

“Only active BBWAA members are permitted to vote for the annual awards, which include MVP, Cy Young, Rookie of the Year and Manager of the Year,” the website states. “Two writers from each city in the league vote on those awards.”

The website further explains that those two writers are selected after being “recommended by the local chapter chairman and approved by the national secretary-treasurer.”

iMediaEthics wrote to the BBWAA for comment.  The group’s secretary-treasurer, Jack O’Connell, responded:

“They are the BBWAA awards. Who else would vote on them? The conflict of interest charge is weightless. The BBWAA will continue to vote on these awards and present them.”