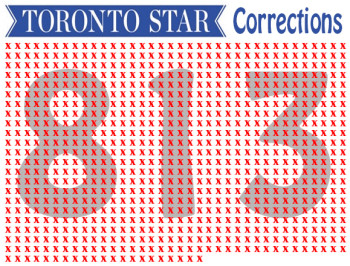 The Toronto Star published 813 corrections in 2014 – a little more than 2 a day, according to the newspaper’s public editor Kathy English.

“The Star published 428 correction for mistakes published in the newspaper last year,” her annual corrections report stated. “Another 385 errors were corrected online only.”

She explained that most corrections were fairly basic: “The corrections of 2014 are largely the result of common ‘garden variety’ errors such as misspelled and mangled names, wrong dates, wrong numbers, incorrect facts, misquotes and misunderstandings.”

One big error occurred when the Star wrongly reported 800 Tutsis and Hutus were killed twenty years ago in Rwanda, when it was in fact more than 800,000.

“More than 800,000 Tutsis and moderate Hutus were murdered during the Rwandan genocide. An April 19 article about films about human justice screening at this year’s Hot Docs festival misstated the number of deaths as 800.”

To help prevent errors, Star newsroom staff uses “accuracy checklists” to help remind reporters to check with “self-editing necessary to minimize the most common type of errors in the Star.”

English also provided a rundown of some of previous years’ corrections count. Last year, for example, there were 403 print corrections and 582 online corrections.

Below see iMediaEthics’ chart of the past few years.