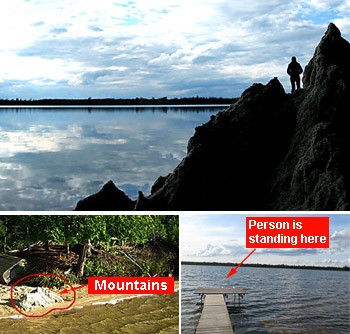 "It's a technique called "forced perspective" which is used to make objects appear larger or smaller than their actual size...(distorting) the apparent distances between relative objects."

“At first glance, this picture may not seem very special. Obviously, somebody is standing on a rocky ledge overlooking a pristine lake, right? …In reality, the rocky ledge this person appears to be standing on is actually a sand mountain built by my uncle… you might say, ‘then surely you must have found a gnome to pose for the picture?’ No, that’s my sister. She’s just standing on the dock about thirty yards away.”

This same forced perspective trick was used by Mike and Jamison Stone for their fake “Monster Pig” kill. Jamison poised  5’5″ behind the hog making him appear (deceptively) small and the pig humongous.