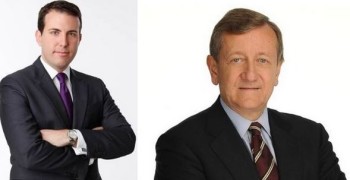 Gabe Gutierrez (left) and Brian Ross (right) both must appear in court next month. (Credit: NBC News and ABC News)

ABC News’ Brian Ross and NBC News’ Gabe Gutierrez got in trouble with the Chicago federal court for attempting to interview Dennis Hastert during his June 11 arraignment.

Next month, the pair could be fined or banned from the courthouse, according to the Chicago Tribune.

According to the June 11 court filing related to Gutierrez, uploaded online by Politico, U.S. marshals and court security saw on June 9 that “Gutierrez run in the wrong direction through a closed security check point in an attempt to interview [Hastert] in the Courthouse lobby.”

Gutierrez’s interview attempt was “outside the designated media area,” according to the filing.

The filing explained that the rules for the courthouse ordered that “interviews may occur only in the media area of the lobby.” Further, “filming of any security equipment or uniformed security personnel is prohibited.”

The June 11 court filing for Brian Ross, ABC News’ chief investigative correspondent, also calls out his attempt to interview Hastert in the lobby of the courthouse.

“On June 9, 2015 and on June 10, 2015, ABC News televised and published on the internet a number of news story depicting Respondent Ross soliciting and attempting to conduct an interview with a criminal defendant while that defendant was entering the Courthouse lobby magnetometers and attempting to walk to the south elevator bank, both of which are outside the designated lobby media area.”

Gutierrez and Ross must appear in court on July 28 “to show cause why sanctions should not be imposed,” the ruling states.

ABC News declined to comment to iMediaEthics about the court filing. iMediaEthics has written to NBC News for comment.