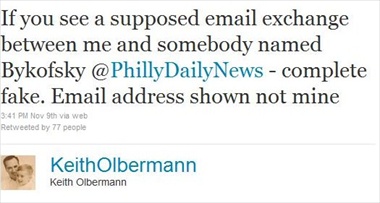 In those e-mails, Carlson pretended to be Olbermann, labeled Bykofsky “a moron” and “pathetic,” and criticized MSNBC president Phil Griffin.  Griffin is the same person who “indefinitely suspended” Olbermann last week for his political contributions, and then ended that suspension just four days later.

The “testy” exchange was published on Phawker.com, which was also duped.

Carlson and the Daily Caller garnered serious media attention this summer when it published the private listserv e-mails of JournoList, which led to at least one resignation (that of Washington Post’s Dave Weigel) and again raised the question of how traditional, objective media ethics guidelines apply in the Internet age.

Olbermann debunked the Hoax interviews Nov. 9 on Twitter:  “If you see a supposed email exchange between me and somebody named Bykofsky @PhillyDailyNews – complete fake. Email address shown not mine,” Olbermann explained.  Yahoo News’ Michael Calderone reported that an MSNBC spokesperson also “confirmed the emails are fake.”

As Yahoo News’ Michael Calderone noted, Tucker Carlson bought the web address www.keitholbermann.com back in July.   He confirmed that Carlson admitted to writing the fake e-mails.  Carlson reportedly say he “didn’t expect the email exchange to be published.”

“Could you resist?” Carlson said, according to Calderone.  “It was just too funny. The flesh is weak.”

Steele called the incident “a silly thing to do, but a serious issue. It raises the whole question of journalistic independence and standards no matter who the journalist is or the news agency.” Further, Steele is quoted as saying “If he was intentionally being deceptive and deceived someone else it raises an ethical issue.”

The New York Times reported that Bykofsky admitted to having been “snookered.”  Bykofsky reportedly said that Carlson “does an awfully good Keith Olbermann impression.”

The Phawker post of the e-mails now features several updates, corrections and an apology, admitting that the site has “Been punked.”

One of the updates noted that last year the state of New York “enacted an amendment” which made it a “crime to impersonate another person” online.  While the post was originally labeled “all dialogue guaranteed 100% for real,” that text has been striked through.