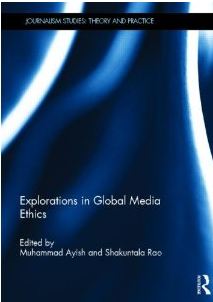 Pursuing a global version of media ethics is a difficult charge on multiple fronts, akin to deciding on the rules of a new sport while in the middle of a match. Let’s consider two of those obstacles, drawn broadly from a series of works Muhammad Ayish and Shakuntala Rao have compiled as Explorations in Global Media Ethics (Routledge). The contributors who presented the papers therein at the Global Media Ethics Roundtable at Zayed University in Dubai in March 2010 hit upon these recurrent challenges:

First, that no matter how broad or granular your frame of consideration, from intercontinental to within neighborhoods, there’s a level of media suited for it — and each of those levels of media, and geographies, may invite different ethics. Second, that media growth and connectivity are outpacing ethicists’ ability (and journalists’ willingness) to negotiate an ethics that could be considered universal. Far from becoming a lingua franca, then, media risk becoming a flash point between traditional Western-derived public values and the Global South, where technology and political change are driving an expansion of journalistic enterprise. Taken together, those points illustrate an immense charge for ethicists. What are best practices for a single, riotous conversation that conceivably includes everyone?

Among the most compelling first steps toward answering that question comes in Clifford G. Christians’ paper, “The Philosophical of Technology: Globalization and ethical universals.” Christians contends that the instrumentalist view of technology — one that says technology is morality-neutral and can be wrong only when used for wrong — compels journalists to make ethically weak decisions. He doesn’t offer an example, but we might assume that the pressures to break stories for a Twitter audience would fit his definition — pressure that leads, say, senior White House correspondent for ABC News, Jake Tapper, to tweet that Margaret Thatcher died, then be forced to follow it soon after with “WHOOPS,” a series of dumb events that was utterly preventable. By enabling an urgency that encourages corner-cutting, technology invites a view that “subverts our ability to make moral judgments,” Christians writes. “A calculus of averages and probabilities replaces ends and the common good. … Efficiency and morality are a contradiction in terms.”

The ethic of technology is efficiency, and media are far from the first industry to face the drawbacks of that truth. “In the highly technological regime we call the mass media,” Christians writes, “ethics is typically considered an intrusion on the media’s neutrality.” By adopting the ethics of its means of production, in other words, the media are held in thrall to an essentially soulless ethical framework. That technology enables the globalization of the media is both a pox and a chance to configure a global media ethics. The same system that allows for worldwide information delivery can also be a platform for moral consideration.

Let’s assume the media can replace its instrumentalist nihilism with something just as widely adoptable but far more useful. What would that include? Defaulting to the First Amendment or even the ethics code of the BBC’s Code of Conduct doesn’t suffice. As Abeer Al-Najjar points out in “Contesting Patriotism and Global Journalism Ethics in Arab Journalism,” her contribution to the collection, the Arab world tends to prize patriotism more highly than the West; meanwhile, journalists must consider the state’s opinion of their work, not least because of the stricter controls on the press. (Al-Najjar cites the Syrian government sentencing journalist Nizar Nauf to 10 years on a charge of “advocating human rights.”) Arab audiences and the state agree that journalists should act patriotically, as a bulwark against attacks and threats from other countries.

Neutrality in this context feels more like a luxury borne of political stability than an unassailable journalistic virtue. To this end, Al-Najjar quotes Middle Eastern journalists who are appalled by the phrase “collateral damage” in CNN and BBC war coverage. Too much distance can become not only artificial but inhumane.

Meanwhile, a deferential approach could kowtow to regional or local custom that undercuts journalists. In his paper “Towards a Global Journalism Ethics Via Local Narratives: South African perspectives,” Herman Wasserman drives hard to this point:

“This introduction of non-Western perspectives into a ‘global’ narrative needs to go beyond superficial and patronizing gestures of inclusion and diversity. A tokenistic inclusion of the Other as a way of validating the hegemony of existing, dominant frameworks may (albeit inadvertently) result in a relativistic ethics (where local ethical norms are included but not engaged critically).”

He suggests, as an example, that in Africa traditions of dignity and respect could “be abused to prevent criticism of government,” a non-starter by virtually any standard. In his view, African media ethics remain a live battle while two main questions are debated: To whom are journalists responsible? And to what degree should they be free?

Since the 1960s, the first answer has been that African journalists are expected to promote development, which Wasserman writes “has mostly meant supporting governments in attaining their economic, political and cultural development goals.” The potential contradictions between that role, and one that challenges a government’s aims and outcomes, is glaring. But any imposition of Western media ethics, Wasserman argues, must consider the notion of society most prevalent on the continent: a collection of communities or families rather than a collection of individuals. Those who have prescribed journalism ethics for Africa are inclined toward a version of liberalism, Wasserman writes, that views media as a component of “individual rights and a free-market environment,” a perspective abundant in the Western tradition.

While that may be a more time-worn approach to journalism, it’s hard not to see it as perhaps dangerously narrow. Advocating the individual in opposition to the state has a place within ethical media, but supporting free markets should not also reduce humans to mere consumers. If the African and the Arab approaches to ethics have anything to tell the West, it might be to embrace the communal as a source of strength and responsibility.

Ethics of God and Globe

Any honest discussion of global ethics in any realm must answer first what elements of humanity can be said to be truly global. To fold in a discussion of media — by its nature a collective endeavor — further sharpens the question. A global media ethics must seek to describe just how humans can best live alongside one another. Not for nothing does Aristotle appear three times in the notes of Explorations of Global Media Ethics.

Suitably, the papers therein reach to the spiritual to grapple with these issues. Abderrahmane Azzi writes in his “The Morality of Journalism Ethics: Readings of Al Nursi’s theory of God’s attributes” that the Muslim theologian Al Nursi Badi’uzzaman Said would bring to bear on questions of media ethics. “It is up to researchers and journalists to create a meaningful balance between what exists and what ought to exist,” Azzi writes, describing how media should consider the teachings of a man who saw meaning as deriving completely from a knowledge of God. To ignore the influence of this line of thinking, according to Azzi, is to overvalue Enlightenment thinking, at least in Islamic countries.

As Azzi sees Al Nursi’s view, a communicator must acknowledge human limitations — foremost, that without deep religious faith, there can be no understanding of morality. An abiding faith would obviate media’s questions around violence, libel and invasion of privacy. A journalist in the Al Nursi tradition, Azzi argues, would pursue truth as a matter of moral conviction, would examine his own actions within a higher value system, and would foster a “moral independence which resists unquestioned assumptions” as a way to uproot the contradictions inherent in human nature. In short, Azzi describes a journalist who would be nearly as compatible with a New York wire service as he would be with a deceased Qur’anic scholar.

For those of us who wouldn’t know God if He called to cancel His subscription, Stephen J. A. Ward, the war correspondent turned Wisconsin philosophy professor, attempts a unifying theory of media ethics that seemingly will always work in a pinch. To address the hang-ups around antagonizing the state, Ward’s essay, “Ethical Flourishing as Aim of Global Media Ethics,” cites the Spanish philosopher Ortega Y Gasset’s notion of “criticism as patriotism.” Foremost, though, he stresses that ethical media ought to align with human flourishing — helping people develop their capacities with dignity, justice and respect. “Global journalists seek the individual, social, political and ethical dignity for humanity at large,” Ward writes.

In practice this means covering educational systems, political structures and justice denied on the basis of inequalities. It means guiding a public conversation free of distortions and robust with open dialogue. And, perhaps most challenging to the Arab model described above, he advocates cosmopolitanism as a principle. This would imply “that journalists accept that transnational principles of human rights and social justice take precedence over their own interests, or even the interests of their country, when they conflict,” Ward writes.

This pushes media into a tetchy realm, and journalists into a space where they could be seen as traitors. Ward includes a caveat here. Global journalists, he writes, fastidiously represent others “since misrepresentation can spark wars, demean other cultures and support unjust social structures.” Accurate representation, then, perhaps could defuse wars, illuminate other cultures and advocate justice. If these become the goals of a global media, other concerns shrink to mere details. The ethicists may outflank Twitter yet.