Tweets ask Did a man die because a NY Post photographer failed to help? 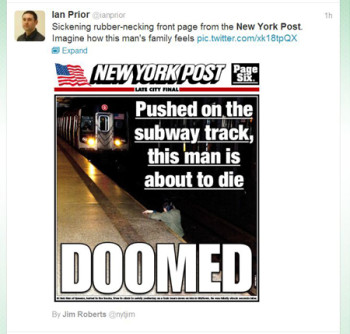 Yesterday, December 3, 2012, a tragedy unfolded in the underground subway station near Times Square, in New York.  Ki-Suck Han of Queens was allegedly pushed onto the tracks by a deranged man and was struck by on oncoming train and later died of his wounds.

A New York Post photographer happened to be on the same platform and shot a picture of the man just as he was about to be fatally struck by the train.  The shocking photograph is plastered on the front page of today’s New York Post accompanied with the headline “Pushed on the subway track, this man is about to die DOOMED.”

Ian Prior (@ianprior) tweeted “Sickening rubber-necking front page from the New York Post. Imagine how this man’s family feels.” His tweet received many responses, mainly critical of the New York Post, that ranged from calling for the photographer’s arrest to Jamie Daven’s tweet “holy shit he’s about to die. Quick, where’s my camera?”

Section of conversation sparked by Ian Prior tweet (screen shot)

The ethical issues here are many. We are working on a piece that wrestles with these issues.

What was the photographer’s responsibility?  Did he have to do anything? Did he do enough?

Why was no one else trying to save this man?

Was it appropriate for the New York Post to publish these photographs just because they had them?

Tweets ask Did a man die because a NY Post photographer failed to help?