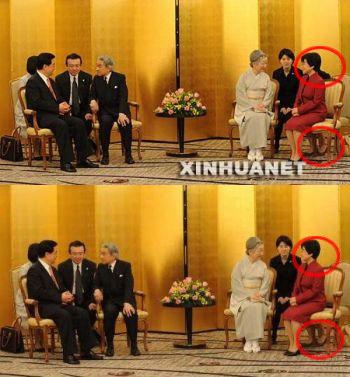 China's President Hu and his wife were saying good-bye to the Emperor of Japan but Mrs. Hu's translator messed-up the shot (see top image). China's state-run Xinhua News service used Photoshop to remove the translator but forgot the feet below the chair (see lower image).

Last May, when China’s President Hu Jintao and his wife were saying good-bye to the Emperor of Japan, Epoch Times said, “Mrs. Hu was sitting too close to her interpreter.” The interpreter was partially cut off in the shot. To rectify this, the  Xinhua News removed the interpreter from the scene with Photoshop software.

The Epoch Times reports, “They forgot to remove her feet.” See bottom right. The top half of the translator is gone but her feet remain under the chair. The photo was in a Chinese newspaper, Jiefang Daily. The public joked that the image showed “Two people with six legs.”

Such Photoshop alterations, as done here by the Chinese news agency, are a big no-no for news photography, as StinkyJournalism has often reported. Yet they keep happening around the world with body parts added or subtracted at will. Blick.ch, as reported by the web site, PhotoshopDisasters, this week, cut off a woman’s right arm in the middle of a wedding photo–and no one but bloggers noticed.