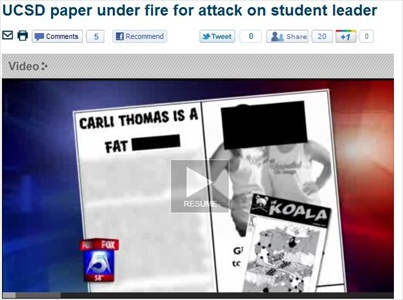 A student satire publication, the Koala, posted a doctored photo and negative story about a student government leader. (Credit: Fox5)

Further, the coverage called her a “thick-necked uppity skank” and a “homely unf—able bovine” accompanied with a doctored photo of the student “crudely doctored to include a cutout of male genitalia spread across her face.”

The Koala calls itself “The Worst in Collegiate Journalism since 1982.”  The offending article was signed by “Editor-in-Queef, Kris Gregorian.”

According to College Media Matters, the student, Carli Thomas, “is seeking therapy for the emotional pain the Koala has caused, calling the content obscene, pornographic, and blatant sexual harassment.  Her mother is seeking the article’s removal from the paper’s website and legal redress.  As of last week, her communication with the university had gone unanswered.”

In a statement, the university addressed the article and photo of the student:

“The university does not endorse, condone or approve of the material the Koala publishes.  Under the First Amendment, the university is severely limited in the actions it can take in response to content published by students.”

“It’s distasteful.  [I] just kind of fell apart and called my mom.”

She reportedly responded to the claims that the newspaper is under by free speech protections, saying: “I don’t think it’s free speech when it’s obscene. There’s sexual harassment,” she is quoted as saying, stating that the campus police “couldn’t take the report based on the First Amendment.”

Thomas’ mother has been in touch with lawyers and university administration, according to 10News.  Thomas has “tried several times”  without success to have the offending material taken off the Koala’s website, TV station KTLA reported.

According to 10News, Thomas thinks the photo and story are “retaliation for her decision to cut funding to The Koala newspaper.”

iMediaEthics notes that a disclaimer on the Koala’s website reads: “Now on a serious note: if you have a real problem with something we publish, we encourage you to contact us about it. We’re almost all adults here, and contrary to popular belief, we’re really not out to harm anyone. It’s all in fun. So relax.”  Further, the Koala’s disclaimer page claims “Most complaints on articles written and printed by the staff will be acknowledged and if we find that we have been insensitive to our readers, we will issue an apology to those offended. ”

10News noted that it called the Koala’s editor, Kris Gregorian, for an interview, but he “refused to do an interview unless 10News gave him a case of beer.  10News did not, because it is 10News’ policy not to pay for interviews, so Gregorian ended the conversation.”

“Thomas said she worries future employers will research her before an interview, see the picture and move on to the next candidate,” 10News reported.

According to KTLA, this isn’t the first time the Koala has generated controversy.  The newspaper “satirizes campus life, often insulting students, faculty and administrators.”

Student Press Law Center has several postings on its website about the Koala including reports on the Koala’s controversial June 2003 edition “which portrayed the religious ans cultural practices of Muslims in a sexual manner”  and for Gregorian’s use of “a racial slur” about the “racial stereotype party” dubbed “the Compton Cookout” on a 2010 “broadcast” by the Koala on Student Run Television.

Also, a Facebook page titled , the Koala wrote and posted 10News’s story on the incident on Feb. 17:

“Lesson learned, if you don’t want people to ever read the phrase “Carli Thomas is a Fat Whore” you should tell a major news outlet, so they can tell everyone via television. And repost it on their website. Why didn’t she just make it her facebook status and take out an ad in the Jew York Times?”

iMediaEthics is writing to Student Press Law Center for comment and will update with any response.