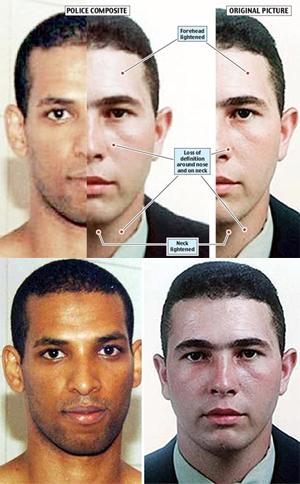 During a 2007 trial, The Daily Mail reports the charge that police manipulated photos. The obvious purpose of such Photoshop lightening of skin tone and other possible photo alterations (see top images prepared by police vs. bottom, actual photos) was to convince the jury that the police shooting victim , on right, Jean Charles de Menezes , looked like the 7/21 suicide bomber, on the left. The honest confusion of identities was why, according to police, the innocent Brazilian was killed.

The UK Daily Mail reports October 2007 that police were accused of “dishonestly manipulating a photograph showing Jean Charles de Menezes next to a suicide bomber.”

As background: Mr de Menezes, a Brazilian, was accidently shot and killed by UK police in a London subway station a day following the “failed London bomb plot on July 21, 2005.” It was ruled in early 2009 that “no individual police officers will face charges.”

The Mail explains, “The remarkable composite picture – one half containing the face of the innocent Brazilian and the other that of terrorist Hussain Osman – was shown to a jury by the Met in an attempt to explain why they shot the wrong man dead.” The police claimed it was a honest confusion of identities and that the two men looked alike.

They continued,”The jury heard the images used to make the controversial composite were taken from a 2001 identity card photograph of Mr de Menezes and a photograph of Hussain taken by police in Rome.” See enlarged image.