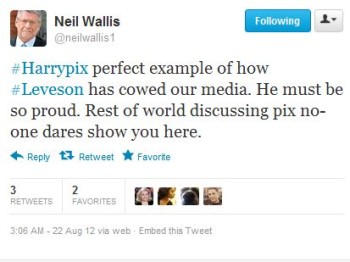 Earlier this week, TMZ published photos of Prince Harry naked.  But, the UK media was asked “not to publish the naked grainy images of Prince Harry,” the Hollywood Reporter wrote.

CNN and the Independent reported that “the Palace” said that because the photos “were taken in a hotel suite where the prince would have had a reasonable expectation of privacy,” running them would violate the UK Press Complaints Commission’s code reading “It is unacceptable to photograph individuals in private places without their consent.” The Independent noted the photos were taken in “his VIP suite” in a hotel during what the Hollywood Reporter called a “private holiday.”

In a separate post, CNN suggested that UK outlets wouldn’t run the photos for fear of the Leveson Inquiry into press standards and practices.  For example, former UK News Corp. deputy editor Neil Wallis tweeted:  “#Harrypix perfect example of how #Leveson has cowed our media. He must be so proud. Rest of world discussing pix no-one dares show you here.”

Wallis expanded on those thoughts in an article for the Huffington Post, where he is identified as “media commentator, former tabloid editor – and currently under arrest as part of Operation Weeting.”  Wallis wrote:

“Whether, despite the pictures being online and free to see worldwide already for half a day, Britain’s national and regional print media (still a massive source of news information for most UK citizens) will risk Leveson Law, Leveson’s Wrath, to publish.

“The decisions are being reached on the basis of: ‘What will Lord Leveson think?’  And that is shocking, it is outrageous, it is a disgraceful affront to free speech… and it’s true.”

The UK Independent reported August 23 that “royal aides confirmed the authenticity of the photographs,” that the media was called to not run the pictures and that UK “tabloids were reluctant to publish the images.”

Related, the Press Gazette reported August 21 that a UK judge told reporters not to reveal that “the victim of a mugging was on the phone to Prince Harry at the time he was robbed – although the information had already appeared in a number of media reports.”

The reason for the order, which was “turned…into a formal order under section 4(2) of the Contempt of Court Act 1981,” was to avoid “the potential to tempt [jurors] to speculate about connections with the royal family.”  Press Gazette reported on the order August 21 because the case was over and “the jury convicted the defendant.”

According to Press Gazette, “the Prince heard the mugging taking place and alerted police.”

We’ve written to the PCC for more information and will update with any response.

The PCC’s Jonathan Collett told iMediaEthics by e-mail that

“The Palace have themselves confirmed that they contacted the Press Complaints Commission and used our pre-publication services to pass on their concerns about the potential publication of the photographs to Editors. They used the same system that is available to members of the public, which the PCC has developed to allow people at the heart of a news story to make editors aware of their concerns before publication. The decision on whether to proceed with publication rests with Editors, who clearly will be mindful of the Editors’ Code of Practice. The PCC has not received a formal complaint about the photographs and the Commission has not made any ruling on the issue.”

We asked if any editors had reached out to the PCC for guidance but Collett he couldn’t ” provide information on confidential advice given by the PCC as by its very nature it is confidential.”